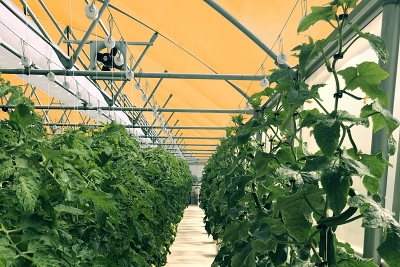 UbiQD, the Los Alamos National Laboratory spin-off that specializes in optical applications of quantum-dot materials, says it has closed a $7 million round of series A venture funding.

With the support from lead investors Scout Ventures and Keiretsu Forum, UbiQD is set to scale deployment of its “sunlight manipulation” technology. The approach uses quantum dots embedded in glass and flexible optical films to optimize the spectrum and concentration of light for applications in agriculture and energy generation.

UbiQD's commercial partner Nanosys, which manufactures quantum dots mostly for displays applications, also took part in the round as a strategic investor.

“UbiQD will deploy the capital raised in this round to continue scaling the roll-out of its first commercial product, ‘UbiGro’,” announced the firm. UbiGro is designed to alter the solar spectrum so that plants can utilize sunlight more effectively.

The material works by converting sunlight into a longer-wavelength, orange hue. That red-shift is said to mimic the light of late-summer sunshine, which is thought to be the optimum color combination as it triggers faster growth by mimicking the impending onset of winter.

Space hydroponics
Founded back in 2015, UbiQD has previously won a number of research grants - including for solar windows, and from NASA to develop the quantum-dot technology for growing crops in space.

Up until now, efforts to raise venture funding appear to have been unsuccessful. According to a US Securities & Exchange Commission (SEC) filing dated February 2020, UbiQD had at that point raised none of a targeted $11 million equity round. Earlier filings indicate that more modest efforts to raise money had also missed their targets.

Despite that, UbiQD says that over the past two years various UbiGro pilot customers and technology institutes have validated an ability to achieve 10-20 per cent higher crop yields, alongside faster cycle times, reduced waste, and improved crop quality.

While agriculture remains the major focus, other applications of the quantum-dot films could include clean energy production in urban environments, and anti-counterfeiting solutions for the security industry.

Brad Harrison, a managing partner with new investor Scout Ventures, said in a company release: “UbiQD has really pioneered a new field of materials innovation. Using quantum dots for sunlight manipulation has the potential to transform some of the largest industries on the planet and produce significant profits while doing so.”

Howard Lubert, a co-founder of Keiretsu Forum’s mid-Atlantic operation, added: “UbiQD is fulfilling the long-standing promise of advanced materials; they are bringing nanotechnology to high-impact industries and enabling innovative products to help our world in meaningful ways.

“In doing so, they’re realizing the billion-dollar potential that we immediately saw in the company when we first encountered them.”

UbiQD's CEO HunterMcDaniel said in response to the fundraising effort: “The greenhouse industry is growing at an incredible pace, particularly in North America; we’re grateful to be able to draw on the combined expertise of our investors to capitalize on that market, expand our customer base, and enable new product offerings as we head into a new year.”