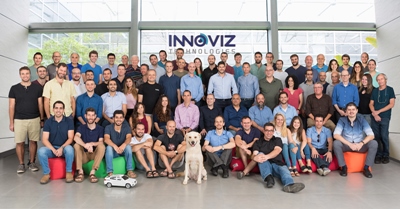 Innoviz team (including Winston the labrador)

Innoviz Technologies, one of dozens of new companies developing lidar technology for future autonomous vehicles, has signed a commercialization partnership with the car parts and systems supplier Delphi that includes a minority investment.

Based in Tel Aviv, Innoviz was founded by a group of former Israel Defense Forces intelligence officers, and claims to have developed a compact, solid-state, high-resolution lidar that combines “best-in-class” performance with low cost.

Last August the company raised $9 million in a series A venture funding round, and earlier this year it signed an agreement with contract manufacturing firm Jabil that is expected to see its first after-market lidar unit for cars become available in early 2018.

Challenging conventions
Like several of its competitors, Innoviz claims that it will offer a technological approach ensuring that lidar operates with sufficient range, speed and sensitivity to make autonomous driving viable. Difficulties with the current technology include problems caused by glare, and distinguishing between different types of low-reflectivity objects – for example a large rock and a black bag – from a couple of hundred meters away.

“Delphi shares our vision for making vehicles smarter and safer,” said Omer Keilaf, the startup’s co-founder and CEO. “By challenging the conventions of lidar design, we were able to develop a lidar solution that delivers superior performance at a reasonable price and in a much smaller footprint – three factors that are required to help autonomous driving achieve mass commercialization.”

Innoviz is yet to reveal publicy the details of its technological approach, simply saying that the “advanced software and computer vision” capabilities embedded in its lidar will enable superior perception of the vehicle’s surroundings.

Under the latest deal, the Innoviz lidar units will be integrated into Delphi’s wider autonomous driving systems. The automotive giant’s CTO Glen De Vos commented: “Along with radar and vision technology, lidar is an essential component to Delphi’s automated driving perception suite.

Backing up the commercial partnership, Delphi has also made a minority investment in Innoviz. Delphi previously invested in Quanergy Systems, which is also developing a lidar solution for autonomous vehicles, when it took part in a $90 million series B round alongside Samsung Ventures and Sensata Technologies – the old sensor division at chip giant Texas Instruments.