Another new entrant in automotive lidar for autonomous vehicles, Innoviz was set up by former Israeli intelligence officers. 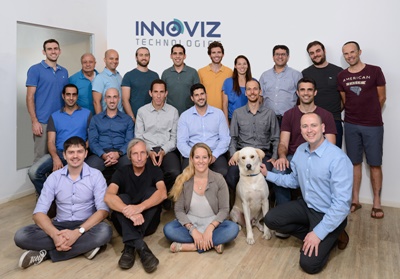 Innoviz team (including Winston the labrador)

Based in Kfar Saba, near Tel Aviv, the company is the latest to target the emerging market for autonomous vehicles. It claims to have developed a compact, solid-state, high-resolution lidar that combines “best-in-class” performance with low cost.

Also investing was Innoviz chairman and co-founder Zohar Zisapel, previously head of electronics research at the Ministry of Defense in Tel Aviv and winner of the Israel Defense Prize back in 1979.

In fact, all five of the Innoviz co-founders have a background in defense, with all except Zisapel having worked for several years in the intelligence corps of the Israel Defense Forces.

Among them are CEO Omer Keilaf, who also headed up engineering teams at pico projector display firm bTendo before it was acquired by the chip-maker ST Microelectronics, and – more successfully – at fabless flash memory controller firm Anobit, bought by Apple in what was estimated to be a $390 million deal in 2012.

With the latest venture, the Innoviz team believes that it can offer a “breakthrough technology” capable of meeting the demand for wide-field-of-view, high-resolution, long-range lidar sensors at a cost of less than $100.

“Innoviz intends to take a leading role in the development of the full sensing system required for this emerging industry and overtake technological challenges such as sensor fusion, 3D mapping and localization,” announced the firm as it emerged from stealth mode, adding that it planned to present its prototype product by the end of this year.

Safety ‘compromised’ without lidar
The company joins a fast-growing group of both established companies and start-ups targeting the high-profile but still nascent market for autonomous vehicles that the likes of Tesla, Google and Apple are all seeking to dominate.

“The car industry is gearing up towards a revolution by the introduction of autonomous vehicles,” said CEO Keilaf. “The ability to transform this vision into a reality depends on performance and cost.”

He added, in an apparent reference to the recent fatal crash involving a semi-autonomous Tesla car: “Current approaches compromise passenger safety by failing to include lidar sensors as part of the system, due to cost and performance limitations. 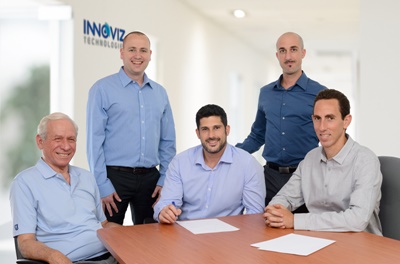 “Our ground breaking technology will make our HD-SSL [high-definition solid-state lidar] accessible to [the] mass market, positioning Innoviz as a leading force in the manifestation and acceleration of this revolution.”

Chairman and series A investor Zisapel added: “I always look to invest in companies leveraging advanced technologies to solve real pains for their customers and the lack of cost-effective lidar is definitely a pain point for the autonomous vehicles industry.”

Recent developments in the increasingly crowded market for lidar sensors have included ZF’s investment in Germany’s Ibeo Autonomous Systems, Ford’s backing of US start-up Civil Maps, and Denso’s support for the VCSEL component maker TriLumina. Canada’s LeddarTech is working on similar technology, while the likes of Velodyne and Quanergy have already established strong relationships with car makers.

VCSELs are seen by some as a key component required to meet the cost-performance demands of solid-state lidar for autonomous driving, with photonics company II-VI among those looking to ramp production and analysts at BCC Research suggesting that the emerging market could hold “a great future” for VCSELs.