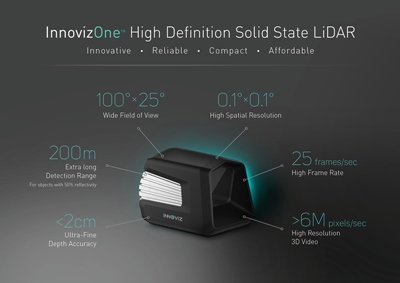 The Israeli firm, based near Tel Aviv, attracted $9 million in a series A round of equity funding last August. Like a number of companies in the lidar space, its founders and technology have emerged from the Israel Defense Forces.

Innoviz chairman and co-founder Zohar Zisapel was previously head of electronics research at the Ministry of Defense in Tel Aviv, and winner of the Israel Defense Prize back in 1979.

After-market intro
The company, whose announcement was timed to coincide with AutoSens event taking place this week in Detroit, has also launched “InnovizPro”, described as an after-market lidar solution for testing and research and development activity in autonomous driving.

It is expected to become available in early 2018, with the “InnovizOne” expected to meet automotive grade standards a year later.

“Our mission is to enable the autonomous vehicle revolution by providing the highest performance, lowest-cost and most compact lidar solutions on the market,” said Innoviz CEO Omer Keilaf, also a co-founder.

“Companies are currently spending tens of thousands of dollars on under-performing lidar solutions in order to test their autonomous vehicles. We’ve decided to release our current design and make it available for field production purposes now, because it is already so much more advanced and less expensive than what’s currently available on the market.

“Meanwhile, we’ll continue development on InnovizOne to get it to automotive grade standards by 2019.”

NYSE-listed Jabil will provide electronics design, production and product management services, to mass produce the compact devices – with Innoviz confident that it can hit the kind of price targets that will be needed for widespread deployment.

“We expect, at the beginning, for InnovizOne to be priced at a few hundred dollars, but as volumes increase, price will go down to even below $100,” Innoviz told optics.org.

Product claims include a resolution capability of 6 million pixels per second, depth accuracy of less than 2 cm, and a detection range of 200 meters, although the latter is specified for objects with a reflectivity of 50 per cent – meaning that the range for darker objects would be shorter.

“Innoviz is currently engaging with leading stakeholders on the integration of InnovizOne into driving systems and is continuing development, targeting automotive grade quality for levels 3-5 autonomous driving,” added the company. “Samples of InnovizOne will be available during Q1 2019.”

Although Innoviz has not revealed much about the hardware inside its MEMS-based lidar products, it does say that the technology is able to selectively enhance detection in a specific area, for example delivering increased range, without compromising the rate and resolution of data capture in the rest of the field of view.

“The host can maintain [a] high frame rate and resolution for long-range sensing while continuing to simultaneously stay aware of extra-long-range objects and obstacles, at a lower frame rate,” it says of “multi-frame mode” operation.

Commercial engagements
Keilaf added of the Jabil deal: “We teamed up with Jabil because of their recent investments in technology that enable autonomous driving for all types of vehicles. We are leveraging the engineering excellence of their optics team, together with their automotive expertise, to support our new product introduction efforts at their newest facility in Haifa, Israel.”

Irvin Stein, VP of Jabil Optics, said: “Our optics experts are excited to collaborate with Innoviz to develop and deploy their 3D scanning and sensing solution. Combining the strengths of our engineering teams with the ingenuity of Innoviz is exactly the disruptive edge required to execute on key technologies for autonomous driving.”

In December last year, Innoviz revealed that it was partnering with the Canadian automotive component supplier Magna International, with Innoviz’ lidar units subsequently appearing on the Magna booth at the Consumer Electronics Show (CES) in Las Vegas the following month.

The Israeli firm told optics.org that it is working with a number of “leading OEMs and stakeholders” in the automotive industry, but declined to reveal exactly who.

Automotive lidar has become one of the most hotly contested applications in photonics over the past couple of years, with scores of companies targeting what is expected by many to be a lucrative new market in self-driving vehicles relying on a fusion of radar, camera, and lidar data to navigate safely.

The increasingly competitive landscape has also seen a high-profile lawsuit brought by Google-affiliated Waymo against Uber, with the latter accused of stealing a wealth of trade secrets relating to lidar technology.