US firm’s hyperspectral approach, based around quantum cascade lasers, selected for Phase III of IARPA program. 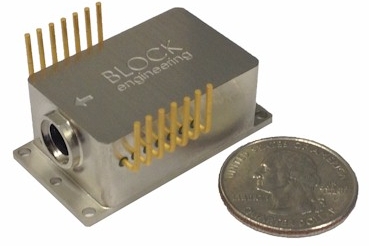 Massachusetts-based photonics firm Block MEMS has won a $5.5 million contract to further develop its laser-based technology for stand-off detection of narcotics and other hazardous chemicals.

Block is the only contractor selected for “Phase III” of the effort, which is being funded by the US Intelligence Advanced Research Projects Activity (IARPA) and involves the US Air Force Research Laboratory (AFRL).

30m range
Called “Standoff Illuminator for Measuring Absorbance and Reflectance Infrared Light Signatures” (SILMARILS), the IARPA program has been running since 2015, with Block MEMS having already won two batches of funding for earlier developments, in 2018 and 2016.

The overall aim is to develop a portable system for real-time stand-off detection and identification of trace chemical residues on surfaces using active infrared spectroscopy, from a range of 30 meters.

Examples of the kind of chemicals IARPA wants to be able to detect include narcotics - notably fentanyl - as well as explosives and chemical warfare agents. Previous phases of the work have seen the technology tested at the Indianapolis 500 motor racing event.

In the earlier phases of the program, Block demonstrated that its eye-safe approach to hyperspectral imaging - based around its proprietary quantum cascade laser (QCL) technology - could detect and map out the location of trace quantities of chemicals on a wide variety of surfaces, at stand-off distances of up to 25 meters.

Now the aim is to accelerate the speed with which target chemicals can be identified. “The goal of Phase III is to develop stand-off chemical detection capabilities with automated real-time processing that are suitable for three different applications,” explained the company.

Those three different circumstances are as follows: a long-range scheme for distances of up to 30 meters suitable for screening vehicles, clothing, and other items including outdoor surfaces; identification of trace chemicals on moving objects - for example screening packages on a conveyor belt or in front of military vehicles; and a more compact (potentially handheld) system for close-range use at a stand-off distance below 5 meters.

“The ability to detect most chemicals, including chemical warfare agents, explosives, and pharmaceutical-based agents at these stand-off distances is addressing a strong need within the intelligence community, the Defense Department and the Department of Homeland Security.”

Company president Al Weggeman added: “This is a great opportunity to partner with IARPA and AFRL in the creation of much-needed technologies that address stand-off chemical and gas detection capabilities. We are resolved to provide protective capabilities to first responders, military, and the public in general.”

Managed by Kristy DeWitt at IARPA, the SILMARIL program goals include achieving high chemical sensitivity and specificity across a broad range of target classes, alongside effective operation in a real-world environment accounting for issues like gas phase and surface-adsorbed clutter, with varying substrates, temperature, humidity, and background light either indoors or outdoors.

The system must also be deemed eye-safe, be genuinely portable, and work under battery power, says the agency.

Other contractors to have been involved in the program at an earlier stage include Leidos, LGS Innovations, Physical Sciences, Inc., and Spectrum Photonics.