QCL-based infrared detector will be designed to meet request by government's IARPA agency. 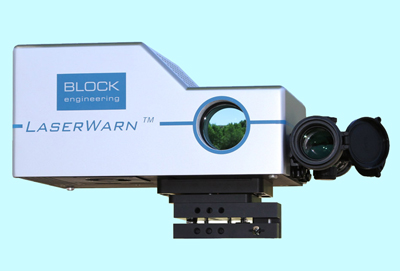 LaserWarn is a QCL-based system designed to protect facilities against chemical attacks.

Block MEMS, a developer of quantum cascade laser-based infrared detection systems, has won a $9.8 million contract with the US Intelligence Advanced Research Projects Activity (IARPA) to develop a system to detect trace quantities of chemicals at standoff distances of at least 30 meters. The award is part of IARPA's Standoff Illuminator for Measuring Absorbance and Reflectance Infrared Light Signatures (SILMARILS) program, which is managed by the US Air Force Research Laboratory at Wright-Patterson Air Force Base, Ohio.

Dr. Anish Goyal, Block's VP of Technology, commented, "Standoff detection of trace chemicals, such as explosive residues, chemical warfare agents and toxic industrial materials, is a critical need within the Department of Defense, and Department of Homeland Security and the intelligence community. There are also many commercial applications for sensitive, standoff chemical detection. Block's QCL technology combined with advanced data analytics makes it possible to meet the challenging performance goals of the SILMARILS Program."

Under the contract, Block will develop a new class of widely tunable, high-pulse energy QCLs and next-generation detection algorithms to detect and identify hundreds of chemicals on a wide range of surfaces. Block has previously developed standoff chemical detection capabilities under several prior government programs and this award will significantly advance the technology for use in real-world situations, the company stated.

Dr. Petros Kotidis, CEO of Block, added, "We have strong capabilities in developing sophisticated standoff chemical detectors and deep, decades-long understanding of infrared spectroscopy. We really look forward to expanding the operating envelope of our chemical detection systems through this award and providing more tools to the intelligence community and to the warfighter."

Block MEMS focuses on the development of high performance QCLs and FTIR spectrometers. Block MEMS has been awarded numerous government contracts over the past decade for the application of its technologies toward the detection of explosives, buried IEDs, chemical warfare agents, toxic industrial materials and chemical clouds. Both standoff and sampling systems have been developed and delivered to the government for additional testing and evaluation.

For example, Block's Porthos is a man-portable, passive FTIR spectrometer system that remotely detects chemical threats as far as 5000 meters away and protects against chemical warfare agents and weapons of mass destruction. LaserWarn is a QCL-based system that is used to protect critical facilities against chemical attacks by establishing a "chemical trip-wire" using eye-safe laser beams.