Such laser-printed materials could halt spread of infections such as MRSA in hospitals. 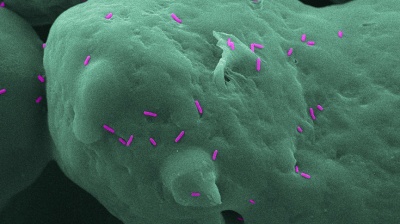 Individual bacteria on a Nylon-12 surface.

Researchers from the University of Sheffield, UK, have, for the first time, manufactured laser 3-D printed parts that show resistance to common bacteria. They say this capability could stop the spread of infections such as MRSA in hospitals and care homes, saving the lives of vulnerable patients.

The work has been described in Nature.

An interdisciplinary team of researchers from the University's Department of Mechanical Engineering and School of Clinical Dentistry combined 3-D printing of a polyamide (a nylon-type material) with a silver-based antibacterial compound in order to produce the bacteria-defeating parts. They then used an EOS laser 3D printer to create several anti-bacterial solid shapes with active surfaces.

Results from their research show that the anti-bacterial compound can be successfully incorporated into existing laser 3-D printing materials without any negative influence on processability or part strength. Thus, under the right conditions, the resultant parts demonstrate anti-bacterial properties without being toxic to human cells.

The team says its findings "offer the potential for applications in a wide range of areas, including medical devices, general parts for hospitals which are subject to high levels of human contact, door handles or children's toys, dentures and consumer products, such as mobile phone cases." Further projects are planned in each of these areas, with an aim to work with leaders in industry and the potential to bring some of these products to market.

Dr. Candice Majewski, lead academic on the project, who works in the Centre for Advanced Additive Manufacturing in the Department of Mechanical Engineering at the University of Sheffield, commented, "Managing the spread of harmful bacteria, infection and the increasing resistance to antibiotics is a global concern. Introducing antibacterial protection to products and devices at the point of manufacture could be an essential tool in this fight.

"Most current 3-D printed products don't have additional functionality. Adding antibacterial properties at the manufacturing stage will provide a step-change in our utilization of the processes' capabilities."

Dr. Bob Turner from the University's Department of Computer Science, added, "Our interactions with microbes are complex and contradictory—they're essential to our survival and they can knock us dead. Technology like this will be key to informed and sustainable management of this crucial relationship with nature." 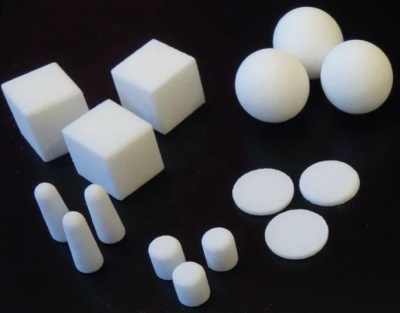 The Nature paper explains how the scientists created the bactericide-infused material: “We printed polyamide 12 parts [a widely-used laser sintering powder: polyamide 12 / EOS PA2200] in a range of geometries using standard settings for this material on a commercial EOS Formiga P100 printer.

“We subsequently printed the same part geometries in polyamide 12 mixed with 1% B65003 silver phosphate glass [the bactericide]. The parts were qualitatively near-identical. This straightforward experiment demonstrated the processability of a mix of sinterable and non-sinterable powders via a Laser Sintering 3D printer.”

The paper goes on to explain how the scientists confirmed the anti-bacterial capabilities of the 3D-printed surfaces:

“We checked for antibacterial activity against two representative pathogens. Parts were incubated in Phosphate Buffered Saline containing bacteria for 24 hours, after which the amount of bacteria in the medium (planktonic bacteria) and on the parts surface was measured.

“Bacteria survived for 24 hours in PBS with a normal polyamide 12 part. There were fewer planktonic S. aureus in PBS that had held a part made of the antibacterial composite than in the equivalent for polyamide 12, with some samples containing so few bacteria that they were undetectable.”