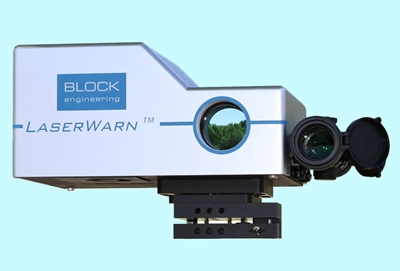 The Marlborough-based firm, which has been nominated for a Prism Award at the forthcoming SPIE Photonics West event, says that the “Phase II” backing follows its successful stand-off detection of trace quantities of explosives using a benchtop system based around quantum cascade lasers (QCLs).

“Under Phase I, Block successfully demonstrated the ability to detect trace quantities of explosives and other threats on multiple surfaces at 1 and 5 meter standoff distances in a few seconds,” it stated, adding that the Phase II selection was made in a competitive down-selection process. That Phase I award was made in July 2016.

30 meter stand-off target
In combination with what Block MEMS calls its “innovative chemical detection algorithm”, the QCL is able to probe for tell-tale spectroscopic transitions in the mid-infrared part of the spectrum that are characteristic of specific molecules.

It has won the funding under IARPA’s “Standoff Illuminator for Measuring Absorbance and Reflectance Infrared Light Signatures” (SILMARILS) program, which is managed by Kristy DeWitt and the US Air Force Research Laboratory at Wright-Patterson Air Force Base in Ohio.

The ultimate aim of the SILMARILS program is to develop a portable system for real-time stand-off detection and identification of trace chemical residues on surfaces using active infrared spectroscopy, at a range of 30 meters.

Specific applications envisaged for the developed technology include airport scanning of hands and clothes for signs of narcotics or explosives, or forensic analysis of the pavement around the area of a chemical release.

Other contractors to have been involved in the program include Leidos, LGS Innovations, Physical Sciences, Inc., and Spectrum Photonics.

Anish Goyal, Block's VP of technology and principal investigator for the company’s SILMARILS work, said that the achievements in first phase of the project had taken a “significant step” towards IARPA’s ultimate goals.

“The ability to not only detect chemical warfare agents (CWAs), but explosives and pharmaceutical based agents as well at these stand-off distances is addressing a strong need within the intelligence community, the Defense Department and the Department of Homeland Security,” Goyal added.

One example is detection of the opioid pharmaceutical fentanyl, which has been implicated in thousands of fatal overdoses in the US, and was known to be used by the late pop stars Prince and Michael Jackson.

Implications
Block's CEO Petros Kotidis said in a company release: “The technology being developed under this program has far-reaching applications within the security markets, as it will eventually enable the highly sought-after capability of stand-off detection of trace chemical threats.

“Ranging from protection of soft targets against explosive terrorist attacks and faster check-in lines at transportation terminals and airports, to detection of CWAs and better surveying of contaminated ground and surfaces, the SILMARILS capability will revolutionize the field of chemical security.”

• Block MEMS, also known as Block Engineering, is one of the finalists in the environmental monitoring category at this year’s tenth-anniversary edition of the Prism Awards, which are organized by SPIE and publisher Photonics Media.

Short-listed for its "LaserWarn" open-path chemical detector, Block is up against another QCL specialist in the form of Daylight Solutions, now a subsidiary of global defense giant Leonardo, and France-based Blue Industry and Science, which specializes in tunable laser gas analyzers based around optical parametric oscillators (OPOs).

The winners across all ten Prism Award categories will be announced at a gala dinner taking place in San Francisco later this month, during Photonics West.