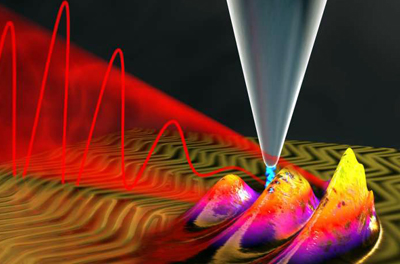 Resolution taken to the extreme. (click for more info).

Researchers at the Max Planck Institute for Solid State Research (“MPG”) in Stuttgart, Germany, have developed a microscope for viewing extremely fast processes that take place on the quantum scale. Its developers Manish Garg and Klaus Kern say that this means “the operations of components for future quantum computers can now be filmed in HD quality.”

The work has just been published in Science.

This scope — which they describe as an “HD camera for the quantum world”— allows the precise tracking of electron movements down to the individual atom. It should therefore provide useful insights when it comes to developing extremely fast and extremely small electronic components, for example.

To be able to video the component-level functioning of next-gen computers or smart phones, researchers need a high-speed camera that exposes each frame of the fast-moving "electron video" for just a few hundred attoseconds; thanks to the work of Klaus Kern, Director at the Max Planck Institute for Solid State Research, and Manish Garg, a scientist in Kern's Department, researchers can now also identify precisely where the filmed electron is located.

The MPG physicists use ultrashort laser pulses in conjunction with a scanning tunnelling microscope (STM). "By combining an STM with ultrafast pulses, it was easy to use the advantages of the two methods to compensate for their respective disadvantages," commented Garg. The researchers fire these extremely short pulses of light at the microscope tip to trigger the tunnelling process. As a result, this high-speed camera for the quantum world can now also achieve HD resolution.

With the new technique, physicists can now measure exactly where electrons are at a specific time down to the individual atom and to an accuracy of a few hundred attoseconds. For example, this can be used in molecules that have had an electron catapulted out of them by a high-energy pulse of light, leading the remaining negative charge carriers to rearrange themselves and possibly causing the molecule to enter into a chemical reaction with another molecule.

"Filming electrons in molecules live, and on their natural spatial and temporal scale, is vital in order to understand chemical reactivity, for example, and the conversion of light energy within charged particles, such as electrons or ions," comented Kern.

The new technique not only allows researchers to track the path of electrons through the processors and chips of the future, but, they explain, “can also lead to a dramatic acceleration of the charge carriers. In today's computers, electrons oscillate at a frequency of a billion hertz," added Kern.

The researchers add that this development could clear the path for light-wave electronics, significantly faster than current computers. “Therefore, the ultrafast microscope not only films processes in the quantum world, but can also acts as the director by interfering with these processes,” said Kern.