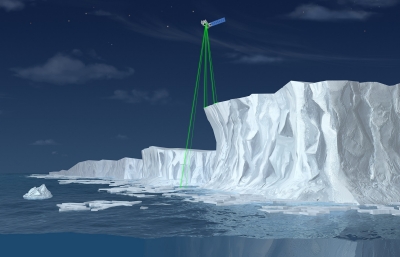 A year after its launch - and now with more than a trillion laser pulses under its belt - the lidar equipment on board NASA's ICESat-2 satellite is said to be providing "potentially transformational" scientific discoveries.

According to an article just published in the American Geophysical Union's weekly "Eos" magazine, the cutting-edge photonics technology has delivered high-resolution measurements of not just ice elevation, but also forest canopies, clouds, and - unexpectedly - the depth of shallow freshwater reserves.

The results from that first tranche of data, released to researchers back in May, appear to vindicate strongly the decision to continue with the mission despite difficulties in the development of the on-board Advanced Topographic Laser Altimeter System (ATLAS), and a major budget overrun.

Changing planet
In their Eos article, Lori Magruder from the University of Texas at Austin and co-authors conclude: "Not only will the precision and resolution of the ATLAS data help create a 20-year record of change in the polar regions, vitally contributing to our understanding and accounting of the effects of climate change, but they will also likely revolutionize our ability to observe change across much of the planet."

Critically, the green laser pulses fired towards the Earth's surface from an orbit averaging nearly 300 miles altitude have a repetition rate of around 10 kHz - meaning that the altimetry data ICESat-2 collects is far more detailed than the earlier ICESat mission.

Key components in the optical system, which produces three pairs of 532 nm beams that scan the Earth's surface, include high-precision telescopes designed by Special Optics, and two flight lasers developed by Fibertek.

"Over almost 12 months of operations, ICESat-2 has produced more than a trillion laser shots in support of science," write Magruder and colleagues, adding that analyses of preliminary data have validated ICESat-2's capabilities for diverse areas of study, some of which were unexpected.

The higher repetition rate of the ATLAS laser system has delivered the anticipated improvement in resolution of ice cover, resolving relatively narrow cracks in the ice that could not be seen with earlier equipment.

"Over glaciers and ice sheets, ICESat-2 data have exceeded expectations with their ability to resolve fine spatial features and make early assessments of seasonal height changes that contribute to the 20-year time series," state the authors, showing how the "incredible" spatial resolution now possible has mapped a rift in the Filchner-Ronne ice shelf in Antarctica.

Using tailored algorithms, researchers have also been able to distinguish between photons that are scattered by the tops of trees and those from the wider canopy - making it possible to map the extent and height of trees, even across hilly terrain.

Lidar mapping data shared in the Eos article show measurements made over Brazil, revealing canopy heights of up to around 20 meters on ground ranging from 400 to 450 meters in elevation.

Freshwater stores
One of the unpredicted results from the first batch of ATLAS data, described as "potentially transformational", is the shallow-water bathymetry technique. Said to enable scientists to study coastal regions and coral reef zones and how they are changing, the capability should also allow quantification of the Earth's global freshwater stores.

This is because the green pulses of light from ATLAS are able to penetrate water in some conditions, providing measurement of underwater topography to depths of 40 meters or more.

Highlighting data captured as ICESat-2 passed over the US Virgin Islands, Magruder and colleagues write: "Over ice sheets and sea ice, ICESat-2 photons penetrate surface water in melt ponds that form in some regions during summer; measurements of the depth of melt ponds will provide insight into the dynamics of the annual melt season."

But perhaps the most remarkable capability of the ATLAS hardware is the extraordinary precision of ice measurements that are now possible. Analysis of the preliminary data indicates that land ice heights determined by repeated ICESat-2 monitoring fall within 13 centimeters of each other, a figure improving to just 2-3 centimeters over kilometer-scale lengths.

"ICESat-2 Antarctic data coverage from the first five months of the mission is such that even the northernmost parts of Antarctica have measurements separated by no more than six kilometers," add Magruder and the team.

Arctic sea ice melts less than expected
According to the latest update from NASA, satellite and flight data have now helped to show that the extent of Arctic sea-ice at the end of summer 2019 ranked as the second-lowest on record - matching levels seen in 2007 and 2016.

Measured at 4.15 million square kilometers as of September 18, the frozen seawater floating on top of the Arctic Ocean expands and thickens every winter, and shrinks back during the summer.

"This year’s minimum sea ice extent shows that there is no sign that the sea ice cover is rebounding,” said Claire Parkinson, a climate change senior scientist at NASA’s Goddard Space Flight Center in Greenbelt, Maryland.

“The long-term trend for Arctic sea ice extent has been definitively downward. But in recent years, the extent is low enough that weather conditions can either make that particular year’s extent into a new record low or keep it within the group of the lowest.”

Currently 2012 holds the record for the lowest extent of sea ice, when a powerful cyclone in August accelerated its decline. But despite the very warm summer in the northern hemisphere this year, weather conditions in the Arctic turned out to be more benign.

It means that although this summer began with a low extent of ice - and NASA's science team anticipating a record low after very rapid loss of ice during July - the ice levels stabilized to some extent from late July onwards.

Researcher Walt Meier from the UN National Snow and Ice Data Center in Boulder, Colorado, explained in a NASA release: “By the time the Siberian fires kicked into high gear in late July, the Sun was already getting low in the Arctic, so the effect of the soot from the fires darkening the sea ice surface wasn’t that large.

“As for the European heat wave, it definitely affected land ice loss in Greenland and also caused a spike in melt along Greenland’s east coast, but that’s an area where sea ice is being transported down the coast and melting fairly quickly anyway.”