Prototype based around OEwaves seed laser said to be close to meeting stiff reliability demands of ambitious 'LISA' mission. 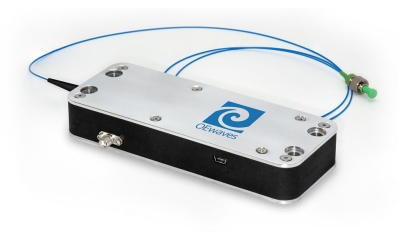 Researchers from CSEM in Switzerland will report next week that their new laser is close to meeting the stringent requirements needed to detect gravitational waves in space.

The prototype system, details of which will be presented at The Optical Society's annual Laser Congress meeting, is being developed for the planned Laser Interferometer Space Antenna (LISA) mission.

The LISA mission has backing from the European Space Agency, and with NASA more recently resuming its involvement a launch in the 2028-2034 time frame is currently envisaged.

If the project does go ahead as planned, the space interferometer would be based around three triangular "arms", each 2.5 million kilometers long, using lasers to detect the tiny perturbations of space-time generated by distant cosmic events like collisions between black holes and neutron stars, and supernovae.

Commercial seed laser
While the instrument would be similar in principle to the existing terrestrial interferometer systems in the US and Italy, its much longer interferometer arms would be able to pick up gravitational waves over a much wider range of frequencies, opening up the new astronomical "window" on the universe.

For the mission to be successful, the laser that is directed along LISA's interferometer arms must meet exacting standards in terms of power output, wavelength, noise, stability, spectral purity, and other key parameters.

CSEM's Steve Lecomte, who will report on developments at the Vienna, Austria, event, and colleagues have built their prototype system around a 1064 nm "HI-Q" seed laser provided by commercial partner OEwaves.

"Our proprietary technology was selected because it was uniquely able to meet the stringent performance and reliability requirements of a space mission," stated the Pasadena, California, firm.

Light from the OEwaves source is then injected into an ytterbium-doped fiber amplifier, boosting the average output power from 12 mW to 46 mW. A fraction of the amplified light is sent to an optical reference cavity, which improves the spectral purity and stability of the laser by orders of magnitude.

The main beam is then directed across a phase modulator, before further fiber amplification to almost 3 W power. Additional components are used to stabilize the output.

Those tests are said to have demonstrated compliance with LISA specifications over the full frequency range, with exceptions below 1 MHz and above 5 MHz, as well as "excellent" noise performance.

And while some of the tests show that the prototype does not quite meet the desired specifications, Lecomte and colleagues says that they have identified the likely causes, and already proposed solutions to fine-tune the system.

For example, they say that adding a drop port to the resonator will reduce high-frequency noise in the seed laser.

But even though all of the laser system’s optical and electronic components are either compatible with the space environment or based on technologies for which space-grade components are available, there is still plenty of work to do.

“While a launch date shortly after 2030 might appear far away, there is still substantial technological development to be performed,” Lecomte said. "The team is ready to further contribute to this exciting endeavor."