Laser giant posts first decline in annual orders since the global financial crisis a decade ago. 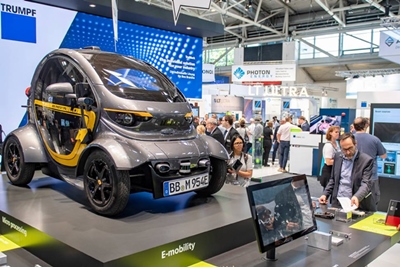 Trumpf's booth at LASER 2019 in Munich

Preliminary sales figures from the German laser and machine tool giant Trumpf have shown the impact of a macroeconomic slowdown, with the Ditzingen firm registering its first fall in annual orders since the aftermath of the global financial crisis.

At €3.7 billion, orders during the 12 months ending June 2019 were down marginally from the €3.8 billion posted by Trumpf a year ago.

Nicola Leibinger-Kammüller, CEO of the family-owned company, said in a Trumpf release: “The economic situation has deteriorated. This is clearly reflected in our order intake, at both the machine tools and laser technology divisions.”

She added that only a few of the firm’s major market sectors, notably extreme ultraviolet (EUV) lithography equipment, were bucking the current downward trend.

Also mentioning the ongoing uncertainties surrounding the UK’s withdrawal from the European Union, Leibinger-Kammüller added: “These uncertainties are toxic for investments.”

As a result of the various destabilizing trends Trumpf’s customers, particularly the smaller ones, are postponing their purchase of new products, said the CEO.

Sales continue rising
Despite those trends, Trumpf was still able to post a solid increase in sales. At €3.8 billion, they were up around 6 per cent on the prior year and once again at a record level. While the domestic market in Germany still represents the company’s largest, sales to the semiconductor lithography equipment firm ASML have become so significant in recent years that The Netherlands, where ASML is headquartered, is now Trumpf’s third largest, after Germany and the US.

Each of ASML’s EUV lithography tools sells for upwards of €100 million, with a significant chunk of their cost attributable to the giant carbon dioxide lasers that are used to generate the EUV-emitting plasma that patterns tiny features into chip designs. ASML is expecting to ship 30 of the EUV tools to chip manufacturers this year.

Trumpf provides ASML with those lasers, and the sales will have contributed massively to the €460 million in revenues attributed to The Netherlands in the financial year just completed.

Summing up the current situation, the company reported: “Trumpf sees the reasons for the decline in order intake in the ongoing trade dispute between China and the US, the uncertainties surrounding Brexit, the structural changes in the automotive industry, and also the economic slowdown in China.”

The company, which responded to the global financial crisis by up-skilling much of its workforce, says its headcount increased by around 8 per cent over the past year. Of its now 14,500 employees, over 7000 are based in Germany, including more than 4000 at its Ditzingen headquarters.

During the financial year just ended, Trumpf added 280 new employees through the acquisition of Ulm-based VCSEL (vertical-cavity surface-emitting laser) manufacturer Philips Photonics. The tiny lasers are expected to find a number of lucrative roles across the consumer electronics and automotive markets in the future.