ASML on the up despite wider semi slowdown 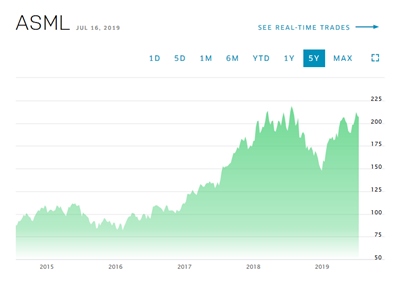 The Netherlands-based semiconductor equipment firm ASML has posted solid financial results for the June quarter, sending its stock price back close to the all-time high reached a year ago.

Bucking a trend that is expected to see an overall drop in the semiconductor equipment market this year, ASML is sticking by its prediction of an “up” year for its sales - despite demand for memory chips falling close to 50 per cent.

CEO Peter Wennink said that a strong second half performance was still indicated in its bookings, and that the company received orders for ten more of its extreme ultraviolet (EUV) lithography systems in the latest quarter.

“People look at 2019 in terms of wafer fab equipment sales,” he added. “The general expectations will be down this year, but not for ASML. 2019 looks like another growth year.”

5G pull
The main reason for that is the continued strong demand for logic devices, as chip manufacturers transition to new processes for patterning intricate features that can only be produced economically with EUV equipment. Each of ASML’s EUV tools is based around hugely powerful carbon dioxide lasers, and associated high-performance optics.

Wennink indicated that demand for state-of-the-art devices used in 5G communications networks was one of the reasons for the logic boom.

In the second quarter, that demand saw ASML post net income of €476 million on sales of €2.6 billion, and register orders of €2.8 billion. Although the sales figure is down a little on the same time last year, the stronger order flow means Wennink and colleagues are anticipating a significant hike in sales and shipments during the second half of 2019.

Third-quarter revenues are expected to come in at €3 billion, while the fourth quarter should be even higher as ASML ships 12 of the giant EUV systems, each of which sells for upwards of €100 million.

If so, that would bring this year’s EUV shipment total to 30. And one potential issue that Wennink does concede is the pressure that ramp will put on the EUV supply chain towards the end of the year.

“The demand is there,” said the CEO. “If there is any risk to that 30 number, it’s probably some supply chain issues that might pop up once we start executing the shipments.”

Slump avoided
However, the response on the stock market suggested that investors do not have too many concerns about that. Shortly after announcing the latest results, ASML’s stock price jumped in value by around 5 per cent to just over $216 on the Nasdaq - equivalent to around $95 billion in market capitalization.

On the EUV development front, Wennink said that ASML had now demonstrated its productivity target of 170 wafers per hour in its own facility, while customers working on memory devices had hit 2000 wafers per day.

The company has also signed a deal to license its EUV pellicle assembly technology Mitsui Chemicals, something that should help the supply chain deal with the jump in demand. “Mitsui Chemicals is able to assemble and sell pellicles in high volume to our lithography customers,” ASML said. “In parallel, ASML will continue to develop next generations of pellicle membranes with its partners, which is expected to enable improved performance of EUV pellicles.”

If the anticipated second-half ramp does proceed as expected, it should see ASML post sales in excess of the 2018 total of €10.9 billion - and in spite of what the analyst company IHS Markit described a couple of months ago as “the worst semiconductor slump in a decade”.