Pre-tax income up more than 50% on last year as the laser firm benefits from demand for EUV lithography tools. 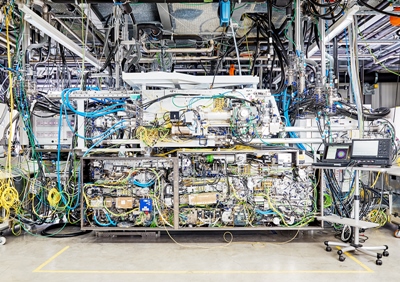 Industrial laser and machine tool company Trumpf has reported a sharp increase in profits in its latest financial year, thanks in large part to burgeoning demand for the ultra-high-power lasers it provides for extreme ultraviolet (EUV) lithography systems.

The Ditzingen-headquartered firm, which earlier this week announced the death of its highly influential previous managing director Berthold Leibinger, had already revealed record sales of €3.6 billion for the year ending June 2018, up 15 per cent year-on-year.

But in its annual report for the 2017-18 financial period, current chief Nicola Leibinger-Kammüller and executives from the family-owned company reported pre-tax operating income of €514 million – a rise of more than 52 per cent on the prior year.

EUV stability key
While sales of machine tools – still Trumpf’s main product line - jumped 11 per cent in that period, the company’s growth was boosted by a 22 per cent leap in revenues attributed to its laser technology division, to €1.5 billion.

“EUV lithography for the exposure of microchips performed particularly well, increasing by 57.3 per cent over the previous year to €250 million,” it reported, adding that the current year should see that total increase sharply once again.

The momentum in EUV is fuelled directly by demand from semiconductor chip manufacturers for new lithography tools from key supplier ASML that incorporate 40 kW-plus CO2 laser amplifier units built by Trumpf. The laser company now has 500 of its employees working on the technology.

ASML’s executives have just reported their own latest financial results, and expect to ship 30 EUV lithography systems in 2019, up from 18 units this year. Each of the tools sells for around €100 million – a significant chunk of which relates to the Trumpf-sourced lasers.

In Trumpf’s new annual report, the company pointed out just how critical the laser performance is, stating: “Throughput of 125 wafers per hour is regarded as the magic break-even point for the chip industry. This was achieved in late 2017 thanks to a newly designed component from Trumpf that keeps the performance of the overall system stable.”

The ongoing demand in EUV will have contributed to Trumpf’s swelling order book. Orders received in the company’s latest financial year stood at €3.8 billion – up from €3.4 billion in the prior 12 months and a strong indication of continued sales growth.

“Ahead of the curve”
The rise in profits has supported a hefty increase in research spending by the company, up 6 per cent year-on-year to €337 million thanks to growing investment in EUV laser and additive manufacturing systems development.

Trumpf also has a number of construction projects on the go, with a new headquarters building in Ditzingen alongside expansions at manufacturing sites in Teningen and Schramberg. Outside Germany, the company has built a new €26 million “smart factory” demonstration site in Chicago and invested €14 million at a production site in China with joint venture partner JFY.

In Trumpf’s annual report – subtitled “ahead of the curve” - Leibinger-Kammüller highlighted the company’s continued high expenditure on research and development work, writing that the digitalization of industry was changing business models at a “dizzying pace”.

“Our R&D/sales ratio is above 9 per cent, which is well above the average for our industry,” she noted, highlighting the investments in EUV technology and laser additive manufacturing. “We’re hoping this research will keep us well ahead of the curve and ultimately enable us to write a new chapter in laser technology. That’s why we have given these two topics the center stage in this year’s annual report.

“As a family-run company, we strive to maintain a good balance between the duality of tradition and new beginnings - and the figures for the past fiscal year show that we are well on track to achieving that.

“With earnings rising by 52 per cent and a return on sales of 14 per cent, we once again saw a major improvement over our prior-year performance. So much so that Trumpf can look back on its most successful fiscal year ever.”