Fiber laser giant says recovery in China has been reversed by geopolitical tensions, with Brexit complications only adding to the uncertainty. 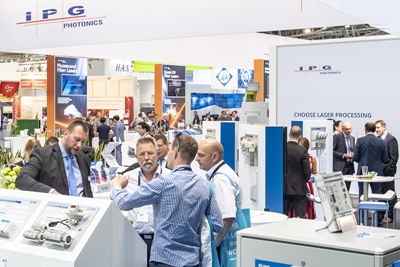 IPG Photonics executives say they are not yet able to provide an accurate outlook for the company’s full-year sales in 2019, with a weakening global economy, the US-China trade war, and Brexit combining to make any predictions beyond September unreliable.

Despite shipping record numbers of lasers and total megawatts of laser power in the June quarter and the recent acquisition of US-based laser systems business Genesis, the Oxford, Massachusetts, company reported a 12 per cent year-over-year decline in sales, to $364 million.

While the Chinese market had appeared to recover during April and May, weak order flow since then has prompted CEO Valentin Gapontsev and his management team to pencil in another slowdown in sales for the current quarter.

Recovery ‘reversed’
CFO Tim Mammen told an investor conference call to discuss the latest results: “Escalation of the US-China trade conflict and further macro softness have reversed the market recovery we had expected to strengthen in the second half of 2019.”

The resulting slowdown of orders experienced during the month of June has continued through the first three weeks of July, he added. “Unfortunately, we believe this is now likely to delay the recovery that had been under way in China.”

Mammen continued: “Our largest machine tool OEM customers have not provided us with expectations beyond the next few months. As a result, we do not have the necessary conviction to provide an outlook beyond the current quarter.”

The upshot of all that is an expectation that sales in the September quarter will slip again, to somewhere between $325 million and $355 million.

Noting sharp drops in sales in China, Europe, Turkey, and Japan, Gapontsev and Mammen did point to rapid growth in sales of lasers producing 10 kilowatt of power or more, as well as newer products like green pulsed lasers used to make solar cells more efficient, and multi-colored sources used in cinema projectors.

CEO Gapontsev added: “Sales of our newest pulsed lasers, which include those at visible and ultraviolet wavelengths and ultrafast pulse durations, now exceed $10 million per quarter and are growing more than 60 per cent year over year.”

‘Extraordinary times’
Mammen said the company was pleased to see that increased level of diversification in the business, which has typically been dominated by sales of lasers used to either cut or weld metals, and is therefore tied closely to swings in demand for machine tools.

“We’ve been working on this [diversification] for a while, and now we have some traction,” Mammen told investors, suggesting that in around two years from now, the IPG sales breakdown will look a lot more diverse.

CEO Gapontsev also pointed out recent orders for two 60 kilowatt lasers as evidence for the growing move towards ultra-high-power sources, adding that IPG still had plenty of scope to continue making its lasers more competitive.

Developments on that front include a new generation of more powerful diodes to pump the fiber lasers, along with better heat-sinks that will ultimately enable even higher output powers and improved reliability.

Asked to try to quantify the likely sales picture in the closing quarter of 2019 and for the full year, Mammen indicated that there were simply too many variables to do that with any certainty right now, with the apparently escalating complications over the UK’s withdrawal from the European Union only adding to the difficulties presented by the US-China trade war.

“These are extraordinary, uncertain times,” the CFO said. “We need to get through the [third] quarter and see where we are, and where the trade war ends up.”

• Despite the nature of the financial update, IPG's stock price held steady in early trading on the Nasdaq on July 30, suggesting that the continued dip in sales and uncertain outlook for the year were already "priced in" by the market. Trading at around $137, IPG's market capitalization now stands at just over $7 billion.