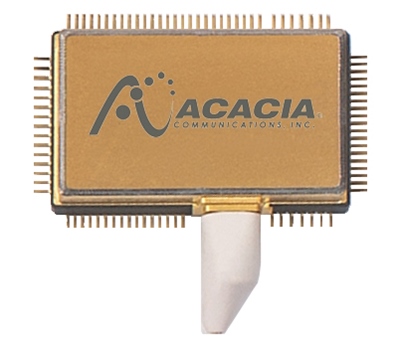 Cisco has revealed plans to acquire Massachusetts-based Acacia Communications, its supplier of optical interconnects, in a deal valued at $2.6 billion.

Under the terms of the agreement, which if approved will see Acacia become part of Cisco’s optical systems and optics business unit under executive VP David Goeckeler, the Silicon Valley telecoms heavyweight will pay $70 per share in cash to complete the deal.

Cisco says it plans to support Acacia’s existing and new customers looking to combine coherent optics with digital signal processing, photonic integrated circuit (PIC) modules, and transceivers for use in both long-haul networks and data centers.

Increasing capacity; driving down cost
News of the Acacia deal comes just a few months after Cisco completed its acquisition of the silicon photonics developer Luxtera for $660 million, with the intention of incorporating the technology into its data centers and other networking systems.

“With the explosion of bandwidth in the multi-cloud era, optical interconnect technologies are becoming increasingly strategic,” said Goeckler in a Cisco release announcing the latest deal. “The acquisition of Acacia will allow us to build on the strength of our switching, routing and optical networking portfolio to address our customers’ most demanding requirements.”

In a blog post explaining the rationale behind the move Bill Gartner, Cicso’s VP of optical systems and optics, wrote that the three primary challenges for cloud and service providers across the various networking platforms were now to increase capacity within the existing fiber-optic infrastructure; drive down the cost-per-bit ratio; and to increase the level of automation.

“Solutions to these challenges will drive significant architectural shifts for service providers,” Gartner noted. “A key trend in this segment is the migration from chassis-based solutions to pluggable optics. Functions that were traditionally delivered in separate chassis-based solutions in a separate optical layer will be available in a pluggable form factor as part of the IP layer – offering significant benefits for network operators in terms of operational simplicity and lower cost.”

Gartner added that Acacia’s coherent optics technology would be part of the solution to meeting escalating consumer demand for data.

“In addition, Acacia uses silicon photonics as the platform for integration of multiple photonic functions for coherent optics,” he continued. “The greater levels of integration increase the density and reduce the cost of the coherent optics.

“Leveraging the advances in silicon photonics, each new generation of coherent optics products has enabled higher data transmission rates, lower power and higher performance than the one before.”

“Upon close, Cisco and Acacia will continue to serve and support existing Acacia customers,” he stressed – confirming that the integration within Cisco would not stop it from working with third parties. “By integrating Acacia technology into Cisco's networking portfolio, we believe we can accelerate the trend toward coherent technology and pluggable solutions while accommodating a larger footprint of customers worldwide.”

If all goes according to plan, the acquisition should close in early 2020, assuming regulatory approvals are cleared.

Following the announcement, Acacia’s stock price jumped in value by around 35 per cent, to trade at just below the $70 price agreed with Cisco.

Co-founded by CTO Benny Mikkelsen, VP of digital signal processing and optics Christian Rasmussen, and VP of hardware and software Mehrdad Givehchi, Acacia listed on the Nasdaq exchange in 2016, following an IPO at $23 per share.

In 2018, Acacia posted a net income of only $5 million, as sales dipped 12 per cent on the prior year’s total, to $340 million. However, the firm enjoyed a strong start to 2019, comfortably beating its sales guidance for the opening quarter of the year.