Caltech project uses photoacoustic-guided and infrared-activated micromotors for drug delivery in the intestines. 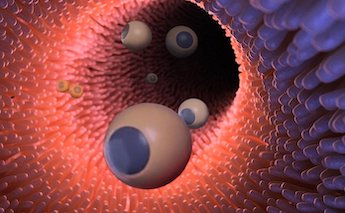 The ability to deliver individual drug molecules to precise areas of concern within the body would offer several advantages over less discriminating therapeutic approaches, and researchers are developing several possible strategies to tackling the challenge.

Current progress in the design of synthetic micro- or nanomotors capable of being navigated within the stomach or GI tract for biomedical purposes makes them an attractive solution, but existing technology has not proven ideal for effective motion control and imaging in vivo.

A project based at Lihong Wang's Caltech lab has now demonstrated a potentially suitable technology platform, in which the migration of micromotor capsules in the intestines is visualized using photoacoustics, and drug release from those same capsules is controlled by near-IR light. The work was published in Science Robotics.

"The microrobot concept is really cool because you can get micromachinery right to where you need it," said Wang, a pioneer of photoacoustic microscopy whose work has shown the technique's promise for imaging blood flow and for cancer diagnosis. "It could be drug delivery, or a pre-designed microsurgery."

The microrobots, developed jointly by Wang and Wei Gao of Caltech's Department of Medical Engineering, are specifically intended for treating tumors in the digestive tract.

Each one consists of a microscopic sphere of magnesium coated with thin layers of gold, alginate, and a barrier coating of parylene polymer. A layer of medication is sandwiched in an additional layer between each microsphere and its parylene coating, and a circular portion of the sphere is left uncovered, resembling a porthole.

Groups of spheres are then gathered into individual microcapsules by encapsulation with gelatin, producing a capsule suitable for swallowing by target animals—or in the future, perhaps human patients.

In trials using mice, migration of the capsules through the animal's gut was monitored in real time and in vivo using photoacoustic computed tomography (PACT). The gold layer enhanced the capsules' photoacoustic signal against the weaker background signal of the environment, and the inherent high resolution and relatively deep penetration of PACT meant that the capsules could be imaged throughout the mouse's intestine.

Once in the right area of the mouse's stomach, irradiation with continuous wave near-IR light induced the collapse of the gelatin capsule, releasing the individual microspheres with their therapeutic cargo. The same light also triggers active chemical propulsion of the spheres, caused by generation of tiny amounts of gas from the gold layer, directed through the deliberate hole in the structure.

Although actual steering control is impossible, accurate knowledge of the spheres' location via PACT before activation can enhance the chances of spheres hitting the target area once they commence active motion. And when they do, the propulsion helps them to stick to the surface, so they can begin to release the payload of medication as the outer layers dissolve.

The project's published paper notes that although the platform has demonstrated it can work with mice, future human clinical translations may require imaging through tens of centimeters of tissue. PACT is effectively limited to around seven centimeters, but a more penetrating excitation source such as microwave and acoustic detection may allow thermoacoustic tomography to be used for the same purpose. Focused ultrasound heating may then increase the depths of thermally triggered microrobot release to the whole-body level of humans.

Other developments could see the same principle being modified to allow the spheres to carry various cargoes, including therapeutic agents and diagnostic sensors, with real-time feedback during delivery.

"Our current platform, integrating real-time imaging and control of micromotors in intestines in vivo, may lead to the next generation of intelligent microrobotic systems and provide opportunities for precise microsurgery and targeted drug delivery," commented Wang.