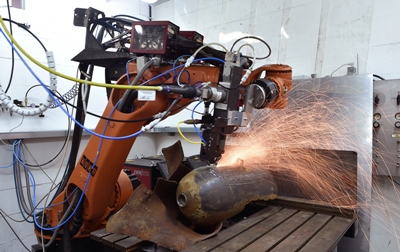 A team of engineers in Germany says that their new laser-based technique will provide a safer and less disruptive method for deactivating thousands of unexploded World War II bombs.

The method, under development at Laser Zentrum Hannover (LZH), uses two steps. The first is a laser ablation stage, which uses a mobile, automated laser system to create a grooved “notch” along the length of the unexploded bomb, weakening its casing.

It means that when its fuse is subsequently triggered, the bomb fails to reach the temperature required to generate an explosion.

"The first experiments in the field with explosive material will take place in the coming months, however only on sheet metal," LZH told optics.org. "The partners will start to work on actual bombs probably in the beginning of 2019."

Unwanted detonation
The project, funded by the German Federal Ministry of Education and Research (BMBF) through April 2019, is being co-ordinated at LZH by Jörg Hermsdorf. Officially, it is entitled “DEFLAG”, short for “Safe deflagration of duds by laser technology”. Other partners include the Hamburg fire brigade’s bomb disposal unit, and LASER on Demand, a German company that rents out specialist laser equipment.

They estimate that of around 1.3 million tonnes of bombs dropped during the 1939-1945 conflict, somewhere between 12 per cent and 24 per cent were “duds” – and that only about half of these have subsequently been cleared.

“Unexploded bombs are and will remain a serious threat to civil security in many parts of the world,” LZH reports, adding that the challenges and dangers of conventional methods for defusing theses bombs are enormous – and inevitably result in significant disruption in the locations where they are found.

In the UK, the Ministry of Defence says that it deals with around 60 such explosives every year. In February, a large (500 kilogram) unexploded World War II bomb found near London City Airport resulted in an evacuation and flights cancelled for an entire day.

“The amount of weapons hidden underground in Germany is difficult to predict, but according to KRD [the Hamburg fire brigade’s bomb disposal division] estimates, about 60,000 tons are still in the ground,” adds LZH. “During the defusing process there is an extremely high risk of unwanted detonation, especially in complex ignition systems. Often blowing up the dud remains as a last resort.”

Deflagration not detonation
The approach being developed by the DEFLAG project partners works by what they call targeted deflagration. “In contrast to a detonation, a lower pressure wave is created during deflagration and the explosive is converted only to a small extent,” they explain.

The notch that is laser-ablated on the bomb casing is created with a field-compatible, automated processing platform, with the LZH team carrying out the process on steel sheets up to 25 mm thick. “In doing so, they achieve an ablation depth of up to 16 mm with an external gas supply,” they add.

• Also making an appearance on the LZH booth at Hannover Messe will be the research center’s latest efforts in the area of laser additive manufacturing, including work on “multi-material” printing.

Example applications in the future could include production of materials with different levels of hardness in different places – for example custom-designed headphones or hearing aids that must be rugged and hard on the outside, but soft and comfortable on the ear.

The LZH booth will be located in Hall 2, at the pavilion of the State of Lower Saxony, on stand A08.