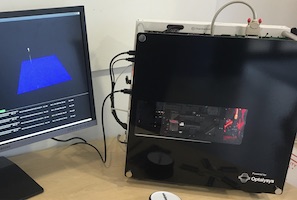 CNNs, a focus of interest for the kind of machine learning methods referred to as deep learning, are expected to be crucial elements in applications such as the control of autonomous vehicles and medical image analysis.

"Optalysys has for the first time applied optical processing to the computationally demanding area of CNNs with initial accuracy rates of over 70 percent," said Optalysys CEO Nick New. "Through our scalable optical approach, we are developing models that will offer whole new levels of capability, not only cloud-based but also opening up the potential of CNNs to mobile systems."

The company's technology, developed from its origins at University of Cambridge spin-out Cambridge Correlators, uses optical components to perform a mathematical function on an input light signal. This approach can allow Fourier transforms (FT) to be calculated more rapidly than conventional electronic computation can achieve, with inherent potential to carry out multiple computations in parallel and scale-up the capacity of the system.

The Optalysys architecture employs spatial light modulators (SLMs) to manipulate the optical signal, and the company has been able to exploit the high-performance components now being developed by the displays industry for high-resolution micro-displays. SLMs designed for those applications offered the company a solution to the challenge of inputting data into its platform and increasing the power of the system, although SLMs developed specifically for optical computation may well become a feature of the system in the future.

"Our collaboration with the Genome Analysis Centre, now the Earlham Institute, to develop a new Genetic Search System (GENESYS) recently concluded and surpassed expectations, and has led to a co-processor product that is now in beta test with selected genetics institutes and universities," Nick New told Optics.org.

"In parallel to that, we have also been developing the technology to suit other applications. There are several areas where the same computational functions are clearly a good fit, and others where we can adapt the workings of the optics to perform tasks that you would not normally associate with FT operations. We have applied it to weather forecasting, where spherical harmonic functions are involved in mapping the atmosphere's fluid dynamics; and to the solving of partial differential equations. But opportunities in deep learning and AI may well be greater than anywhere else."

Demand for optical solutions
CNNs have already been used successfully in the analysis of visual information, for tasks such as image recognition and classification, which makes them of great interest for a variety of modern autonomous and intelligent systems.

"Mathematically, a convolution function is very similar to the correlation function we have already applied in the gene sequencing project, and now the potential is there for our optical processing to be at the heart of these large CNNs," said New. "Training these models to recognize images correctly in different scenarios is a huge computational task, and the calculations involved can take days or weeks to run on the largest conventional computers; but the task fits very well into the scope of our technology."

New commented that the company's forthcoming co-processor product can already offer raw FT processing speed well in advance of that possible with a current high-end graphics card but with much lower power consumption - an advantage that will only improve as the systems evolve and become larger.

At the same time, the SLMs and optical components employed are likely to become yet smaller and more efficient, potentially allowing the Optalysys architecture to become compact enough for use in consumer-facing applications. New anticipates seeing the system inside MRI scanners for image analysis, or in autonomous vehicles as part of their control systems, and further ahead appearing in much smaller devices or even in mobile phones.

"The advent of deep learning applications means that the demand for this kind of technology is rocketing," he said. "To achieve next-level performance in terms of how good these deep learning models are, you need an awful lot more processing power than you can get from standard electronic solutions. Hence the interest in alternative computing technologies for deep learning, including optical AI and different types of optical computation. The surge for optical solutions is absolutely upon us now."