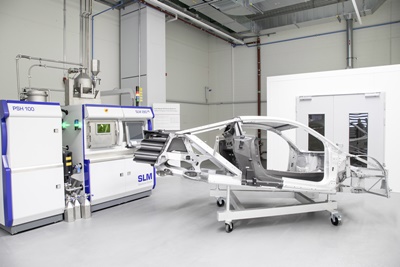 The primary market for metal additive manufacturing (AM) systems and metal powder materials was worth $950M in 2016, and will storm to $6.6 billion by 2026.

That’s according to a new market report by the Virginia-based industry analyst company SmarTech, whose team reckons that metal additive manufacturing is entering a “pivotal” year of change, remaining one of the strongest growth areas within the broader 3D printing sector as it matures from largely prototyping activity to series manufacturing.

Changing market structure
“Incumbent processes and vendors who have enjoyed numerous years of strong growth with little competitive pressure now face a significantly different market structure in 2017, characterized by a drive towards real manufacturing implementation and digital manufacturing business model realization,” says the analyst firm in its third report on the metal AM market.

While non-laser techniques – such as electron-beam powder-bed fusion and powder-directed energy deposition – are used, the current market is dominated by laser systems.

According to SmarTech Germany-based EOS (Electro Optical Systems), the pioneering laser additive manufacturing equipment firm set up by CEO Hans Langer back in 1989, still leads the way with a 28 per cent share of the 2016 market. 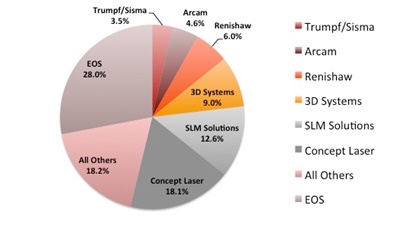 Concept Laser – now largely a subsidiary of the industrial giant General Electric – ranks second with a share of 18.1 per cent, with SLM Solutions and 3D Systems in third and fourth place respectively. Next comes UK-based Renishaw, closely followed by Sweden’s Arcam, also now part of the GE empire, and Trumpf.

“Competitive landscapes are shifting at record pace in the market, with notable acquisitions from GE and market entries by major machine tool manufacturers and metal powder suppliers happening throughout 2016,”points out SmarTech in its report.

“General Electric's own internal consumption of additive manufacturing machines, expected to be around 1000 total systems over the next decade, represents as much as 4 percent of the total market sales for metal AM units in a given year during the forecast period.”

Powders
The analyst firm also warns that major metal powder suppliers are starting to make investments in order to gain a foothold in the future market - moves that could threaten equipment firms. It says:

“These suppliers are ramping up their influence in the market as more end users begin serial manufacturing applications in AM, and as a result hold the potential to weaken the business models of metal AM machine OEMs relying on redistribution of metal powders to customers as an additional revenue stream.”

In terms of geography, market growth was spread evenly across all major regions last year, although Europe clearly remains the largest market for metal AM hardware – with the three leading providers all based in Germany. 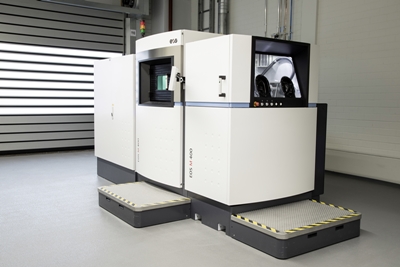 Meanwhile SLM Solutions has reported 22 per cent revenue growth in its fiscal year 2016, with sales rising to €80.7 million. The Karlsruhe company, which last year rebuffed an approach from GE that resulted in the US firm instead turning its attention to Concept Laser, said that sales growth should accelerate in 2017, after it took orders for 130 machines in 2016.

CEO Uwe Bögershausen said: "The 2016 fiscal year was dominated by extraordinary events and earnings fell short of our expectations. Nevertheless, we still view the past year as positive overall: The general interest in the technology rose considerably and the industrial relevance is undeniable. This leaves us looking forward to the rest of the current 2017 fiscal year with great optimism.”

The company is now offering new machines based around multiple 700 Watt lasers, which offer faster speeds and are aimed at series production applications.

• For full details on the SmarTech report, click here.