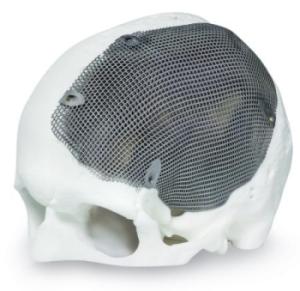 AM implants: made to measure

Treatment of severe facial injuries and the class of conditions called craniomaxillofacial traumas often involves the use of surgical implants, with titanium a popular choice of material thanks to its biocompatibility and high resistance to corrosion.

These inserts have traditionally been made by standard manufacturing and casting techniques, but since 2013 surgical instrument manufacturers Karl Leibinger Medizintechnik - part of the KLS Martin Group - has investigated the use of a LaserCUSING additive manufacturing (AM) platform from Lichtenfels-based Concept Laser to do the job.

The goal has been to exploit the ability of AM to create tailored patient-specific inserts to suit individual surgical cases, rather than rely on inserts of a standard design. Those implants can be used for "distraction osteogenesis," a procedure in which the surgically inserted material encourages new bone growth where needed.

Frank Reinauer, head of Innovation and Production of Biomaterials at Karl Leibinger Medizintechnik, has said that he now consistently relies on additively manufactured implants.

"From numerous aspects, we view titanium as providing the benchmark for implant technology," said Reinauer, speaking for a Concept Laser in-house interview. "But there is another very important aspect in favor of additively manufactured titanium implants: the patient-specific geometry and precision fit. Ultimately this means a high level of functionality."

Surgeons are part of an internet-based process

Since December 2016 Concept Laser has been 75-percent owned by GE, a stake acquired for $600 million. GE recently announced an expansion of Concept Laser's facilities and workforce, saying that it was "moving closer to a day where we can fully serve industries, such as automotive, where the mass production of several parts using additive manufacturing becomes a reality." 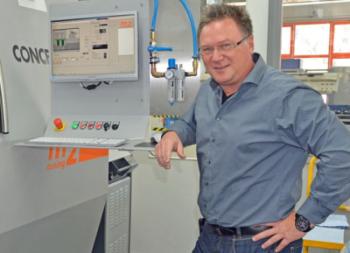 The work by KLS Martin on the manufacture of surgical implants indicates the potential value of a selective laser melting AM operation such as LaserCUSING in the specialized sphere of medical implants as well, although Reinauer described some of the challenges involved.

"I did in fact occasionally forbid people here internally from referring to 3D printing, because when they say this people often mean 3D printers sitting on their desk," he commented. "There are even doctors who think they can print out these parts in the hospital themselves. Industrial or even medical 3D manufacturing has very little in common with this. Our products are niche products which are created with a very high level of quality, a high precision fit and working in close collaboration with surgeons and the medical staff at a hospital."

The M2 Cusing platform used at Karl Leibinger is described by Concept Laser as the workhorse of the company's systems, especially for the processing of titanium and aluminium alloys. Its configurations include the use of a 200 or 400 W fiber laser to suit different applications, and a multi-laser design employing a pair of 200 W sources.

Advantages of the system for Reinauer included its ability to use certified raw materials to manufacture patient-specific implants in manufacturing runs of just one single item, but with a high degree of reproducibility. The fact that each part can be accompanied by precise documentation and records of its digital creation is another plus.

"Essentially today the surgeon is part of a process chain that is internet-based," Reinauer noted in the interview.

"With AM we can fully cater for what the surgeon wants. The surgeon provides us with data from imaging techniques such as MRI or a CT done by a radiologist, from which we generate and construct the stereolithography data as the starting point for the actual additive manufacturing, scheduled to meet a stipulated operation date. The engineers must then balance the requirements of the surgeon and the patient’s circumstances with a construction that suits the process."