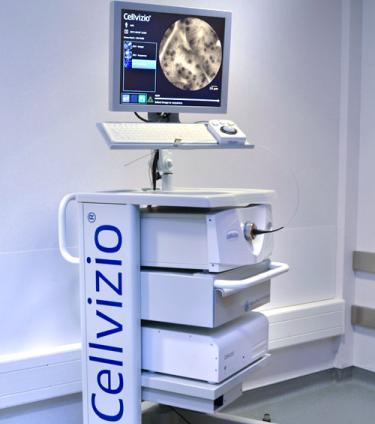 Results from a recent blinded clinical trial have indicated the potential value of needle-based confocal laser endomicroscopy (nCLE) in the diagnosis of pancreatic cysts.

The Cellvizio nCLE platform developed by Paris-based Mauna Kea Technologies is intended to give clinicians the opportunity to perform optical biopsies, making a rapid diagnosis of certain conditions from images generated via an endoscope rather than needing external histological or cytological analysis.

Treatment of pancreatic cysts is known to be one area where this approach could be valuable, since the differentiation between cysts of different kinds can prove challenging for clinicians. Images from an optical biopsy should be able to indicate the key differences in vascular networks which can then be used to guide treatment options, and do so in a less invasive manner than traditional tissue sampling.

As reported in Gastrointestinal Endoscopy, the sponsored study involved six physicians from different countries, experienced in the use of nCLE and blinded to all clinical data, who reviewed nCLE images of pancreatic cystic lesions from 29 subjects.

Results from the trial showed "95 percent accuracy of Cellvizio for malignant pancreatic cysts and 98 percent for benign pancreatic cysts, both with near-perfect inter-observer agreement and intra-observer reliability," according to the company.

Reduced cash burn
"Millions of Americans have a pancreatic lesion and tens of thousands will undergo an unnecessary interventional procedure, including surgeries," said Sacha Loiseau, Mauna Kea CEO. "These results confirm that, as we have seen with other large studies, a majority of these procedures could be avoided with a single Cellvizio procedure performed during an endoscopic ultra-sound examination."

Cellvizio is also expected to be of value in assessments of other medical conditions where less invasive optical biopsies will be advantageous, including Barrett's Esophagus, inflammatory bowel diseases, lung nodules and urinary tract lesions.

• Mauna Kea Technologies recently announced its full-year 2016 financial results, showing a three percent increase in sales compared to the previous year, and the shipping of 54 Cellvizio systems during the period. A net loss of €9.9 million represented a 23 percent improvement relative to the €12.6 million loss reported for the previous year.

The company also reduced its cash burn by 30 percent, from €12 million in 2015 to €8.4 million in 2016, marking continued progress towards an improved financial position after reductions in workforce and the refocusing on licensing deals announced one year ago.

Priorities for 2017 include a new consignment model for Cellvizio in the US, which the company believes could represent a $2.8 billion recurring revenue opportunity for its core business, along with further expansion of the market opportunities available through commercial partnerships.