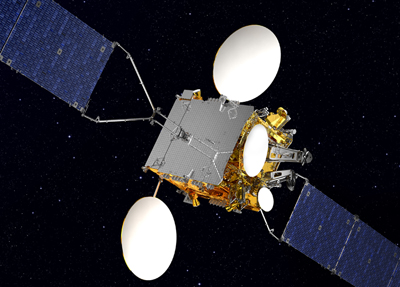 The Koreasat-5A and Koreasat-7 antenna supports will be the largest volume parts so far produced in Europe by powder-bed-based laser melting of metals for operation in orbit. With dimensions of 450 x 205 x 390mm, and weighing just 1.13kg, the parts are described by the partners as “significant lightweight components”.

The additively-manufactured 3D components are used as basic antenna supports to enable the satellite to communicate with the ground base of the satellites. An identical 3D-printed component was installed on both satellites. The relatively large dimensions presented a real challenge for Thales Alenia Space. But they were successfully manufactured by Poly-Shape, which has an established relationship with the aerospace industry.

Florence Montredon, Head of AM at Thales Alenia Space, said, “The typical cost of putting 1 kg of material into orbit is around €20,000, so every gram really does count. The starting weight of the two new satellites is around 3,500 kilograms.”

AM’s potential for lightweight design was therefore a key reason to move away from traditional materials processing methods. For these AM parts Thales specified an AISi7Mg alloy. Applications in space demand high strength, rigidity and resistance to corrosion. The component validation process also revealed a low porosity rate on the finished component of <1%. The tests of tensile and shear strengths also produced pleasing results, the developers stated. 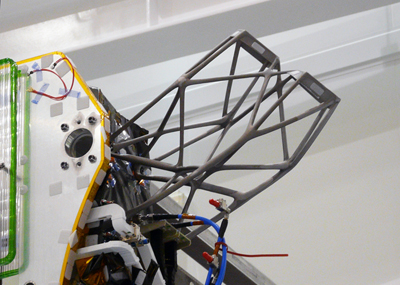 Europe’s largest additively-manufactured part is an antenna support for satellites.

Tests conducted in relation to symptoms of fatigue, according to Wöhler yielded values, exceeded the required specifications, the partners said: “Minor deviations in the geometry were corrected with simple reworking, as was a small crack, which was revealed by the CT. Fairly small pores inside the geometry were accepted following localized mechanical analysis.” Ultimately, the parts successfully passed the dynamic tests carried out at Thales.

Montredon added, “The effects were huge: a 22% weight saving for the bionic AM structure compared to a conventionally-manufactured structure. Not forgetting the reduction in costs of around 30% with the finished part also being available very much earlier.” The cost reduction of 30% is attributable to various factors: outlay on assembly; andthe redesign as an additive, bionic part replaced the number of separate parts that were previously produced from nine to one.

Poly-Shape has 28 x 3D metal printing machines, which have different sizes of build envelope. The largest build envelope dimension for 3D printing with aluminum at the company is an X line 1000R from Concept Laser. This system offers a build envelope up to 630 x 400 x 500 mm3 and has a closed system for reliable process and powder management in accordance with ATEX directives. The X line 1000R also has a rotating mechanism, which allows two build modules to be used reciprocally, thus guaranteeing constant production without downtimes. 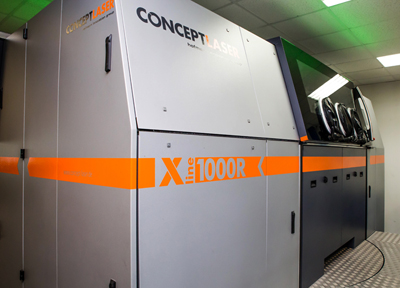 Concept Laser says that this unique machine design not only results in greater availability, but also simpler and, above all, secure handling when arming and disarming the machine.

The project design was optimized to suit the process-related circumstances in the build envelope with Poly-Shape. This involved the orientation of the target part in the build envelope and the necessary support structures. Thales Alenia Space also incorporated methods of Layer-Based Manufacturing.

Montredon added, “It is clear that we have identified AM as a good prospect for further projects. In the future, we would also like to incorporate thermal control technology or radio functions directly on or within the 3D structures. So functional integration is the next task. This is also a logical consequence of the potential offered by AM.”