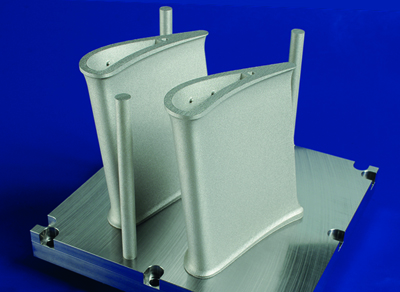 The long lead time for the development of blades and vanes used in gas turbines, such as in power stations, presents a significant challenge to the validation of new part designs in engine tests. Conventional vane production by casting is unsuitable for the fast iteration cycles needed in the development of so-called “hot path” components.

In a joint project, Siemens and the Fraunhofer Institute for Laser Technology (ILT) have now developed a faster production process based on selective laser melting (SLM). Components are manufactured in a modular way in the new process chain, resulting in additional benefits.

Last year, Siemens commissioned its Clean Energy Center, a new combustion test center in Ludwigsfelde near Berlin, Germany. The center plays a major role in developing and refining gas turbines as a facility for conducting realistic tests on various turbine components with liquid or gaseous fuels.

During testing, individual turbine parts are exposed to temperatures of 1500°C or more. Such components are usually manufactured from “super alloys” in a precision casting process, in which each iterative loop may take several months, incurring significant costs. Thus far, this problem has severely curtailed the number of possible tests.

Experts from the Siemens gas turbine manufacturing plant in Berlin and the Fraunhofer ILT in Aachen, Germany, developed a laser-based technology that considerably speeds up the manufacturing process for turbine vanes slated for the hot gas area of the engine.

Dr.-Ing. Wilhelm Meiners of the Fraunhofer ILT commented, "The current application area is for developing blades for stationary gas turbines for power generation. But many other possible customers are currently preparing to use SLM for production, including the likes of Airbus, MTU, GE and others." 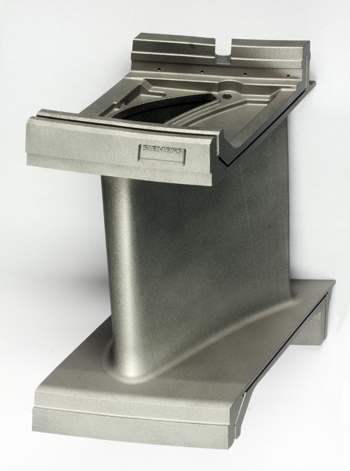 Guide vanes made from Inconel 718 using the new modular process.

To withstand the high temperatures over long periods of time, the turbine vanes require complex internal cooling structures. The partners say that SLM “has proven itself to be up to the challenge, especially for prototypes or small batches featuring complex geometries”. Similar to using a 3D printer, special alloys are melted by laser on a powder bed. The components are then built up layer by layer.

Fraunhofer ILT has built up considerable expertise in the use of additive laser techniques and alloys for components exposed to high temperatures. With this wealth of experience, the scientists were able to develop special processes that made it possible to produce the relatively large parts (up to 250mm of side) at Siemens with a high degree of dimensional accuracy and superior surface quality.

A modified process chain has solved the problem: the platforms and the airfoil are manufactured separately and then subsequently brazed together. This makes it possible to not only eliminate the supports in the blade, but also to improve the surface quality. The result is a fully functional component that can be used in hot path rig testing in order to deliver quick feedback to the design engineers.

Siemens has optimized various production steps in preparation for this idea. After manufacturing via laser, the parts are precisely measured, subjected to finishing, and then joined using high temperature brazing.

This modular production of turbine blades offers significant potential for other components as well. It would make it possible to connect cast and SLM-made parts, leaving just the complex or variable parts to be produced using SLM. At the same time, it would also facilitate the production of parts with difficult geometries that are currently too large for the SLM process.