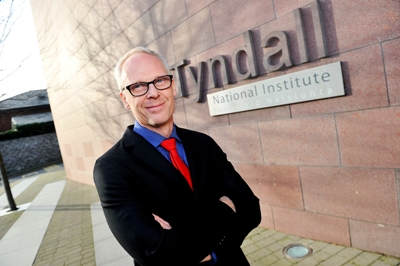 Andersson-Engels is well known for ground-breaking research in the area of photodynamic therapy (PDT), and joins from the University of Lund in Sweden, where was head of the influential Medical Laser Centre, working alongside the likes of Sune and Katarina Svanberg.

Townsend added that establishing a strong biophotonics research program at IPIC and Tyndall would help create strong partnerships with other high-profile efforts under the Science Foundation Ireland umbrella, such as the Irish Centre for Fetal and Neonatal Translational Research (INFANT) and the €70 million APC microbiome institute.

Quoted in a Tyndall release, Andersson-Engels said: “With the medical devices sector in Ireland recognised as one of the five emerging global hubs, it is an exciting time for the [IPIC] biophotonics group to forge close collaborations with companies, clinicians and research centers for the faster development and deployment of more accurate, less invasive diagnostic treatment methods for cancer and other diseases.”

Industry connections
That focus on industry connections and collaborations has been a strong theme in Andersson-Engels’ career to date, with the researcher having set up numerous biophotonics companies as spin-offs from the Lund University work.

They include SpectraPhos, which was subsequently sold to Canada’s Xilinx, and PDT firm SpectraCure, which was founded by Andersson-Engels and the husband-and-wife Svanberg team in 2003 to focus on cancer therapies.

Other spin-offs include GasPorox, which is developing a laser-based alternative to X-ray imaging for monitoring the lungs of premature babies, and molecular imaging specialist Lumito.

The biophotonics effort at IPIC was awarded €6 million from Science Foundation Ireland, part of a wider €30 million investment that is largely but not entirely focused on optical communications technology.

Launched two years ago, IPIC has attracted a number of high-profile industrial partners in the form of Intel, BT, and Seagate, while on the biomedical side it has established connections with optical coherence tomography (OCT) specialist Compact Imaging, luminescent sensor developer Luxcel Biosciences, and point-of-care device maker Radisens Diagnostics.

Mark Ferguson, the director general of Science Foundation Ireland, said of Andersson-Engels’ appointment: “This represents a significant investment in strengthening Ireland’s research capabilities in biophotonics and will further enhance Ireland’s reputation as a global hub for the medical devices industry.”