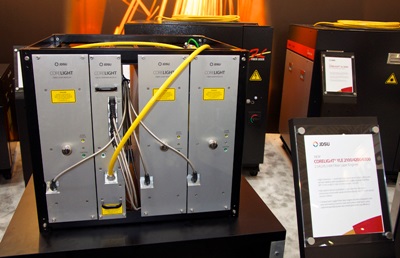 Executives at Lumentum, the new company carved out of JDSU’s expertise in lasers and key components for optical communications, expect a recovery in sales of fiber lasers to increase revenues in its first financial quarter as a separate entity.

Lumentum made its official debut on August 1, and its stock began trading on the Nasdaq exchange August 4. For the current financial quarter, ending September 30, CEO Alan Lowe is expecting revenues to come in at somewhere between $205 million and $215 million.

That would compare with a sales figure of $203.5 million for the quarter that ended June 27, and which was reported by Viavi Solutions – the other new company created by the recent JDSU split.

However, sales of lasers in the June quarter dropped more than 26 per cent year-on-year to $30 million. Lowe told the first Lumentum-hosted investor conference call that the dip was partly a result of a component problem relating directly to industrial fiber lasers that occurred in June but which has now been resolved.

As a result, sales of fiber lasers slipped to only $6.2 million in the quarter. But with a new 6 kW version of the industrial lasers now available – one of many rival systems to appear at the recent Laser World of Photonics trade fair in Munich, Germany – Lowe is confident of a rebound.

“The inventory correction is behind us now, and we expect [fiber laser sales] to grow substantially this quarter,” said the CEO.

However, this market is expected to pick up over the next couple of quarters, with Lumentum’s executives forecasting that total laser sales should return to the typical quarterly run-rate of around $40 million before long.

In Munich Erik Zucker, who at the time was senior director of laser strategy at JDSU before the company’s split, said that one of the keys to success in the fiber laser sector was the state-of-the-art laser diode manufacturing expertise at Lumentum’s San Jose wafer production facility.

The California fab produces high-brightness sources with excellent reliability credentials built up through its long-standing experience in the telecommunications industry. Zucker said that the 630,000-hour diode lifetimes effectively translated to a zero failure rate over the time that a laser would be used.

Lumentum’s multi-kilowatt lasers are based around the 2.1 kW “Corelight” module, which operates at a wallplug efficiency of 35 per cent. Zucker said that he was targeting an efficiency of 50 per cent with the next generation of kilowatt lasers, while a close relationship with Japan-based machine tool partner Amada will be critical to the company’s competitiveness in an increasingly crowded sector that remains dominated by IPG Photonics.

The San Jose wafer fab is also where many of the key optoelectronic devices for datacom and telecom markets are produced. Those applications make up the majority of Lumentum’s sales, and accounted for $173.5 million of the firm’s revenues in the June quarter.

• Since listing on the Nasdaq exchange on August 4, Lumentum’s stock price – under the ticker symbol “LITE” – has held steady at around $20.