LED sales plummet nearly 40% year-on-year as the chip maker posts an annual loss for the first time in more than a decade. 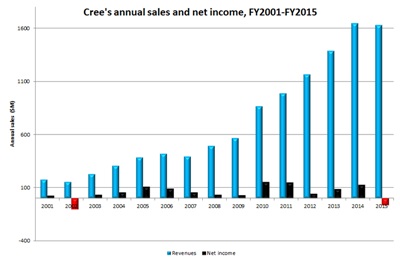 Cree sales and net income since 2001 (click to enlarge)

Fast-falling sales of LEDs and the decision to restructure its chip manufacturing operations have plunged Cree into an annual loss for the first time since 2002.

The Durham, North Carolina, company, which also sells lighting products and high-end RF and power devices based on its key silicon carbide semiconductor material platform, reported total sales of $382.2 million in the closing quarter of its fiscal year 2015.

Already flagged up by Cree in a profit warning issued in late June, that represented a 12 per cent decline on the same period last year overall. Sales of LEDs crashed 39 per cent to $122.2 million – down from $199.5 million a year ago.

On top of that, the company recorded some $44 million in charges related directly to the restructuring that will see LED chip production consolidated into a single fab at its Durham headquarters, plus $40 million in other write-downs. Cree has since agreed a cross-licensing deal with Taiwan-based Epistar relating to blue-emitting nitride devices.

On a more positive note, sales of lighting products – now clearly Cree’s largest business – rose 10 per cent to $229.1 million over the same period.

But that was not enough to stop the company swinging to a net loss of $88 million in the quarter, and of $64 million for its full fiscal year 2015. That compares with a net income of $124.2 million in fiscal 2014, and $86.9 million the year before that. According to US Securities & Exchange Commission (SEC) filings, the last time Cree posted a net annual loss was fiscal year 2002.

LED challenges
In a call with investors, Cree CEO Chuck Swoboda said that the company was looking to the commercial lighting sector to drive sales and profit growth in 2016. He is targeting a 10 per cent rise in revenues for Cree’s full fiscal year, which has just begun.

“We're focused on stabilizing the LED business and executing the previously announced restructuring,” he added. “We believe the LED market will remain very competitive for at least the next year, but target the combination of design wins for our new SC5 LED products and lower cost structure to help offset the competitive challenges in the market.”

“SC5” is shorthand for the fifth generation of Cree’s silicon carbide LED epiwafer technology, and represents the company’s latest chip platform. It is behind innovations such as the latest version of Cree’s “XLamp” single-die LEDs. Last month, the company claimed that the XLamp XHP35 offered fully 50 per cent more light output (up to 1833 lumens) than its previous best-performing single-die LED.

Swoboda said that the LED factory consolidation should be completed by the end of December, and that it would position the firm for revenue growth and higher profit margins in the year to come.

The expectation of a 10 per cent rise in sales includes the RF and power device business unit that Cree is currently preparing to spin off into a separate entity via an initial public offering (IPO) of stock.

Asked whether it might not be better for the company to use all the LEDs it makes inside Cree’s own lighting products – rather than sell externally into what is currently such a tough market – Swoboda said that internal demand would not be sufficiently high to make that practical.

“We have a tremendous investment in R&D and capacity for LEDs, [and] if you're going to make the investment in LEDs and capacity I think you want to participate both as a supplier to the internal division as well as to the external market,” he replied.

“The other thing is that when you're in the external market competing every day it keeps you a lot sharper,” said the CEO, adding that it helped Cree ensure that its own technology was at the right level of cost and performance. “Frankly [it] just makes us a better overall LED company,” he said.