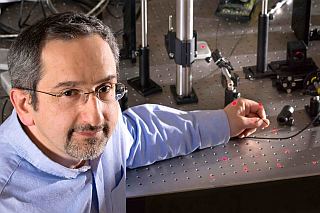 An endoscope under development by a team from the University at Buffalo combines imaging ability with light delivery, as a means to improve both cancer detection and the efficient treatment of tumors once they have been discovered.

The platform employs spatial frequency domain imaging (SFDI) as a means to improve the low-contrast image quality that some endoscopic systems are prone to. But it can also deliver a pulse of light of the necessary strength and intensity to burst nanoballoons of lipid-encapsulated drugs at the tumor site.

SFDI is a relatively new technique that allows quantitative, depth-resolved measurements of tissue absorption and scattering parameters, as well as imaging of exogenously administrated fluorescence contrast agents, according to Ulas Sunar of Buffalo's Biomedical Engineering department.

"The technique directs sinusoidal patterns of light at a tissue surface at multiple spatial frequencies, and measures a frequency-dependent tissue response that, once processed, yields information about the optical absorption and scattering parameters. This information can be much like a fingerprint," Sunar commented. "Quantifying absorption and scattering parameters is very important, since it allows an accurate determination of light propagation and attenuation in living tissue."

SFDI can also quantify absolute fluorescence concentrations of exogenous agents, such as drugs that have been allowed to accumulate in cancerous tissues - an approach usually hindered by deterioration of the raw fluorescence signal thanks to strong tissue absorption and scatter. Knowledge of these concentrations is very useful, since drug distribution can allow better localization of the disease, and accordingly assist with delivery of an accurate light dose for improved therapeutic outcomes.

A further appeal is that SFDI instrumentation can be based around simple, cheap and widely available components, such as CCD cameras, projectors and LEDs. As a non-contact, wide-field imaging method, it could potentially allow clinicians to rapidly screen relatively large areas of tissue, making it suitable for use in the operating theater to map optical contrasts for disease characterization.

Diffuse optics and deep tissues
SFDI has its origins in wide-field imaging research carried out at the Beckman Laser Institute, and is essentially a diffuse optical extension of established structured-light microscopy principles. But while structured light-based microscopy mainly focuses on high-resolution imaging at depths measured in microns, SFDI is designed to image deeper tissues, millimeters below the surface.

"The diffuse optics community mainly focuses on wide-field large tissue imaging of breast, brain, and muscle, so there has not been any specific need to develop it for internal organs," said Sunar. "After working on photodynamic therapy of head and neck cancer for the last five years, and implementing diffuse optical spectroscopy in clinical settings to monitor PDT patients, I realized the need for deep-tissue imaging of internal organs such as the oral cavity, lung, peritoneal cavity and gastrointestinal tract."

Sunar's current project, funded by the National Institute of Biomedical Imaging and Bioengineering (NIBIB), has focused on applying the technique to ovarian cancer.

"The main challenge was accurate quantification of the optical parameters and the drug fluorescence concentration," he noted. "Currently we are working on improving the signal-to-noise ratio along with fast data acquisition and analysis, since projecting the patterns rapidly and acquiring with sufficient SNR is a vital component of the approach. Selection of optical components for a particular application is also very important. Research is all about continuous iterations, and this project is not an exception."

Bursting the nanoballoon
Imaging is only one part of the probe's capabilities. Another project at Buffalo, led by Jonathan Lovell, has investigated ways to encapsulate drugs within modified liposomes, forming "nanoballoons" that will open when hit by a suitably intense pulse of near-infrared light. Arranging for the nanoballoons to reach the tumor and then opening them with a pulse of laser light could be a way to maximize the effective placement of the therapeutic chemical, while also reducing unwelcome side effects.

The two technologies make an excellent fit, with Sunar working on ways to control the profile of the endoscopic light beam and allow it to deliver the balloon-popping pulses.

"This requires control of both the beam shape and intensity," he explained. "We want to control the shape in order to only illuminate those targeted areas where we intend to release the drug, so as to eliminate or reduce the side effects of chemo-drugs."

Controlling the intensity is equally important, given that a threshold beam strength is needed to allow the release process to occur. There may also be scenarios in which the encapsulated drug is localized deeper within the tissue, requiring a different intensity of light in order to reach it and trigger drug release.

Development of the endoscope itself should be completed during 2015, after which the technique will begin its progress out of the lab - a process Sunar believes should go relatively smoothly.

"Clinical translation is very feasible and we are hoping to start within two years," said Sunar. "The main challenge, I expect, will be the clinical acceptance of the drug construct, which generally takes longer due to the necessary side-effect tests. However, in this case the drug construct is based on porphyrin and doxorubicin, both of which are already in clinical use. So we are expecting that the clinical translation will be quicker than usual."