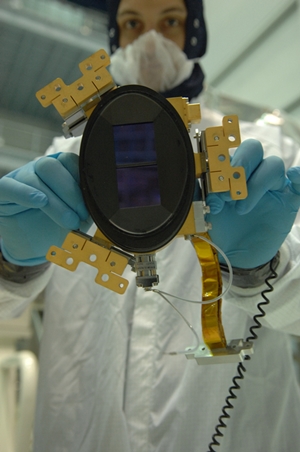 Infrared detectors in three scientific instruments used by the James Webb Space Telescope (JWST) have been replaced, after the original sensors were found to have a design flaw.

According to a release from the European Space Agency (ESA), which is collaborating with NASA and the Canadian Space Agency on the giant project, new detectors have now been installed in all three instruments.

One of those is the ESA’s “NIRSpec” instrument, a spectrograph featuring two mercury cadmium telluride (HgCdTe) sensor arrays that are expected to provide unprecedented information about the chemical composition and age of distant stars and galaxies.

Pierre Ferruit, ESA’s JWST project scientist, said in a statement from the agency: “Excellent detectors are crucial to the outstanding instrument performance needed when you want to look at the extremely distant and faint early stars and galaxies that formed when our universe was still young, and the new detectors secure this top priority.”

Microshutters replaced
The HgCdTe detectors are not the only components being replaced after the recent battery of equipment tests ahead of JWST’s much-anticipated launch, now expected to take place in 2018.

One of the NIRSpec instrument’s key attributes is its ability to analyze light from more than 100 different astronomical objects simultaneously, over a 9-square-arcminute field of view. That will give JWST a unique capability for a space telescope, and to do it requires thousands of microshutters, arranged into four different arrays.

The arrays comprise thousands of tiny windows that can be opened and closed individually so that only the light from each particular object of interest is allowed onto the NIRSpec detectors.

But after simulations to reproduced the kind of noise and vibration likely to be experienced on the launch pad took place in 2012, several thousand of NIRSpec’s microshutters were found to be jammed in the closed position.

To replace the faulty microshutters, ESA says that it had to open the instrument’s outer cover, something that had to be done under strict cleanliness conditions to avoid contamination. Maurice te Plate, its system integration and test manager for JWST, said:

“In particular, the microshutters are very sensitive to material such as small polyester fibers that can get stuck inside and prevent them from fully closing. We just completed our final checks and we are now ready to install NIRSpec back in to the module.”

NIRSpec was built at the EADS Astrium facility in Munich, Germany, over the course of nearly a decade, and was delivered to NASA’s Goddard Space Flight Center in September 2013. Peter Jensen, ESA’s JWST project manager, said of the latest developments:

“NIRSpec is in its final flight configuration. We have now completed the endeavor we started eleven years ago – it has not been easy, but through skill, persistence, and dedication, the team has made it.”