$29.5M deal with US Office of Naval Research expected to result in 'exceptional accuracy' of new laser weapons on warships. 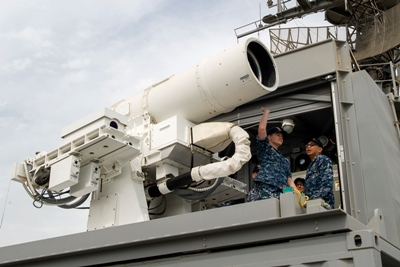 Defense contractor Boeing has won a $29.5 million contract to design and develop a new beam control system to improve the pointing accuracy of high-power laser weapons to be used on board US Navy warships.

The news comes after a series of tests using a prototype laser weapon on board the USS Ponce, a transport ship, that took place in the Persian Gulf in late 2014.

Boeing will now begin designing a prototype “high-power beam control subsystem” compatible with high-energy solid-state lasers. The company says that the resulting subsystem will be compatible with the systems that other companies are designing as part of the Office of Naval Research’s Solid State Laser Technology Maturation (SSL-TM) program.

“The resulting beam control system will focus and hold a laser on a moving ‘aimpoint’ long enough to disable the target,” said the firm. “Doing that with a ship-based laser is particularly challenging, given the maritime environment and constant movement of an at-sea vessel.”

Unlimited ammo
Along with the various other major defense contractors in the US, Boeing has been working for many years on its own approach to laser weapons, part of a new class of munitions going under the general heading of directed-energy weapons.

Because such systems only require power, rather than physical ammunition, they offer the prospect of unlimited shooting ability with a versatile “gun”, while eliminating the need to carry heavy munitions.

Boeing has previously developed very-high-power systems based around thin-disk lasers sourced from Germany-based Trumpf, while last year its truck-mounted 10 kW laser weapon was said by the company to have performed well in tests with the US Army at Eglin Air Force Base in Florida.

However, maintaining the pointing stability and tight focus of several high-energy sources, which are combined to deliver the kind of power needed to ensure the effectiveness of a laser weapon over very long distances, remains a technical challenge - particularly in humid conditions.

“Boeing innovations in beam control and directed energy technologies are keys to understanding laser weapon system configurations that could yield a capability for the Navy in their maritime environment,” said Peggy Morse, vice president at Boeing’s directed energy and strategic systems (DESS) division.

The company points out that the control system will build on the earlier demonstrations at Eglin Air Force Base, where its laser weapon was able to acquire, track and destroy targets like mortars and drones in windy and foggy conditions.

“Important technical data was collected on energy systems within a maritime environment, which ONR shared with the Army and Boeing,” says the firm.