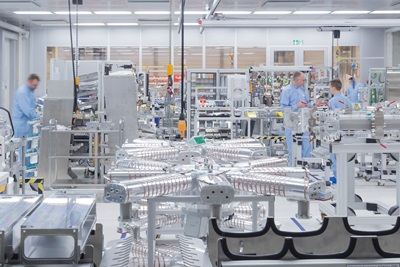 German laser giant Trumpf has reported a sharp rise in sales and profitability, and said that it expects “major orders” for its high-power carbon dioxide laser amplifiers in the coming months for extreme ultraviolet (EUV) lithography applications.

In their newly published annual report, Trumpf’s executives attributed that rate of growth partly to an increase in demand stimulated by the falling cost of its diode-pumped solid-state lasers - although the sliding value of the euro will also have played its part.

“Lasers of this type are finding ever broader application,” reported the Ditzingen-headquartered company, which has just set up a new diode-focused subsidiary in Berlin. “One powerful sales driver is lightweight construction in the automotive sector, for example in the processing of high-tensile steels.”

That was a significant contributor to a year in which the Trumpf Group's pre-tax profit jumped 44 per cent, reaching €357 million, and total sales rose 5 per cent to €2.72 billion. Laser-related sales, which includes figures for Trumpf machine tools featuring lasers, rose 8 per cent to €1.86 billion.

EUV positivity
One of the highlights in the latest financial year was the adoption of Trumpf’s ultraviolet lasers in the production of flexible displays, while the company described the year to June as a “transitional” one for EUV technology – even though an initial burst of orders for test systems had been followed by a quieter period.

However, apparently buoyed by the news from ASML in April that a major chip maker – assumed to be Intel – had placed an order for 15 of its production-worthy EUV lithography tools, Trumpf is sounding very positive on prospects for EUV lasers in the near future.

“The technology is currently in a decisive stage,” says the firm. “The laboratory phase at our customer’s clients is drawing to an end, and preparations for mass production of the latest-generation chips are under way.”

The company adds in its annual report: “With the positive lab results and the long-term major orders within the framework of production preparation, the participants have largely accepted the breakthrough of EUV technology and are no longer questioning it.”

“We are ideally positioned for the major orders we are expecting from the coming fiscal year onward,” Trumpf said, adding that it had established a “strategic framework agreement” with ASML back in May.

In the laser company’s words, that agreement “provides for long-term cooperation and further expansion of the strategic partnership, in order to fulfill the requirements of the exclusive supply relationship and also the needs of the semiconductor industry”.

Ultrashort pulse and additive momentum
The anticipated ramp in orders for the EUV application is a key element in Trumpf’s prediction of further sharp sales growth for its laser technology division in the current fiscal year.

“We are expecting major orders in the area of cutting of hardened glass displays for smartphones for the machine tools division,” it said. “The use of ultraviolet lasers in the manufacture of flexible flat [display] screens will also increase.”

Trumpf also highlighted what it described as renewed interest in laser processing of carbon-fiber reinforced plastic (CFRP) materials. “We are very well positioned here indeed, having developed the method considerably over the past few years,” it claims.

On top of that, the company is expecting demand for ultrashort pulsed lasers in micro-processing applications to grow across industries that have not yet adopted the technology, while plans are afoot to launch a new tool for laser additive manufacturing within weeks.