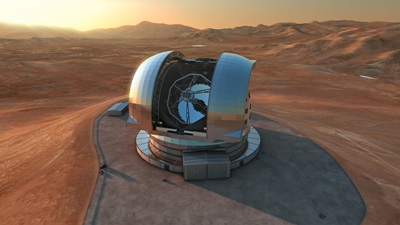 Eye on the sky

As widely reported, construction of the European Southern Observatory’s Extremely Large Telescope (E-ELT) site is under way, following a groundbreaking ceremony that saw part of the Cerro Armazones summit blasted away.

Once levelled off, the summit will be landscaped to accommodate the building that will eventually house the giant 39 meter telescope – a classic-looking domed design that will itself measure 86 meters in diameter and rise 74 meters from the ground.

While much of the focus has been on the sheer size of the E-ELT, just as important and groundbreaking will be the adaptive optical system needed to realize the full benefits of such a large light collector – and without which the blurring effect of the Earth’s atmosphere would make the instrument little better than existing telescopes.

In fact, the adaptive optical system needed by the E-ELT is so complex that the ESO awarded a contract for the preliminary design of the key component – the fourth mirror (“M4”) – to the Italy-based AdOptica consortium more than two years ago.

M4 is critical because it needs to deform quickly and flexibly to cancel out the distorting effect of turbulence in the Earth’s atmosphere. So despite measuring 2.5 meters in diameter, it will be just 2 millimeters thick, and controlled by more than five thousand voice-coil actuators (similar to those that flex inside loudspeakers) that will deform the mirror surface up to a thousand times per second.

M4 will also be used to correct any misalignments between the other mirrors in the telescope’s optical system.

The adaptive optics system also calls for no fewer than six laser guide stars that will be used as reference points to correct for atmospheric turbulence. Those lasers will operate in the yellow-orange range of the spectrum, precisely tuned to excite sodium atoms high in the atmosphere that will glow the familiar color of high-pressure streetlamps.

E-ELT groundbreaking event (click to view if video does not appear below):

Regarded as the largest and most ambitious project ever embarked upon in terrestrial astronomy, the E-ELT will have 13 times the light-collecting power of the largest optical telescopes in use today. And thanks to that adaptive optical correction, it will be able to generate images 16 times sharper than even the Hubble Space Telescope.

Among the other state-of-the-art photonics innovations that will feature inside the E-ELT is a laser frequency comb. According to ESO’s instrumentation roadmap for the project, it will provide stable, simultaneous wavelength calibration over long timescales.

Civil works on the E-ELT project began officially in March this year, initially with the construction of a road to the Cerro Armazones summit allowing construction vehicles to reach it and start preparing the June 19 “blast-off” and subsequent levelling. That should be completed by next summer. 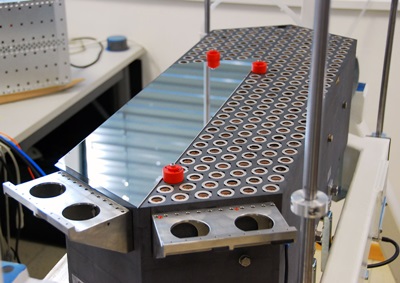 Earlier this month, Spain confirmed its involvement in the E-ELT project during a meeting of the ESO council. It becomes the fourteenth ESO member to join the consortium, with an investment of €38 million.

Next week’s SPIE Astronomical Telescopes and Instrumentation conference in Montreal, Canada, will include a status report on the E-ELT roadmap from ESO’s German delegation. According to their presentation abstract, preparations for the start of the design and build phases of the “first light” instruments and their adaptive optics systems are now well under way.