Comfortable footwear will be de rigeur when the giant photonics exhibition returns next year. 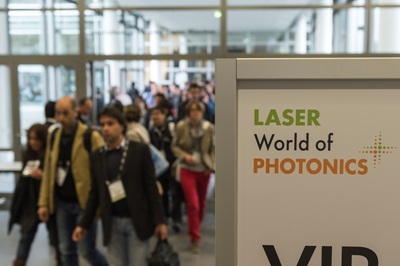 Munich’s biennial Laser World of Photonics event – already the largest in the laser industry – will become even larger next year after organizers Messe München decided to add a fifth exhibition hall to the trade show.

The event, which celebrated its 40th anniversary last year with 1130 exhibitors occupying some 42,000 square meters across four halls, will run from 22-25 June in 2015. Organizers said that demand for more exhibition space is growing unabated, while next year’s event will also coincide with the UN-sanctioned International Year of Light celebrations.

Reinhard Pfeiffer, Messe München’s deputy CEO, said in a statement: “The photonics industry is an industry of the future and the driving force behind numerous other industries. We sense the need for the technology from the growth in exhibitor numbers and from the fact the halls were becoming ever fuller. In 2015 we will be upsizing from four to five halls.”

That move will see the trade fair expand to 55,000 square meters, as it runs in parallel with the various scientific conferences that make up the World of Photonics Congress.

Imaging theme
Messe München has identified three focus topics for the event, including the field of imaging that has traditionally been covered by the “Vision” show organized by Messe Stuttgart. Vision recently switched from an annual to a biennial schedule, following the wishes of its key exhibitors.

“There is scarcely a single production sector nowadays capable of dispensing with industrial image processing, combining stringent quality control with optimal efficiency,” reasons Messe München. “There is a huge need for solutions. Their use is extremely diverse, for example in testing and measurement technology, optics, medical and photo technology, electronics and material processing.”

Laser systems, already established as the key theme of the event, remains as one of the two other focus topics, with 3D printing in the form of laser additive manufacturing set to feature more prominently than before.

Biophotonics and medical technologies is the third of the focus areas, with companies set to showcase diagnostic technologies based on spectroscopy and microscopy, as well as light-based treatments.

Messe München highlights trends in automotive production and ultrafast lasers as areas of interest for the event, for example in the joining of lightweight construction or hybrid materials.

“There are important potential uses for ultrashort pulse lasers to be found in the medical technology arena as well,” say the organizers, including procedures like optical biopsies for cancer diagnosis.

Among the speakers expected to make an appearance in Munich next year are Nobel laureate Ted Hänsch, director of the nearby Max Planck Institute for Quantum Optics in Garching, as well as Serge Haroche, a professor of quantum physics at the Collège de France, who won a Nobel in 2012.

Harvard’s Federico Capasso, best known for developing the quantum cascade laser, has been lined up to open the event of Photonics Congress. It will feature six conferences, organized by international scientific societies including the European Physical Society, SPIE, OSA and the IEEE.