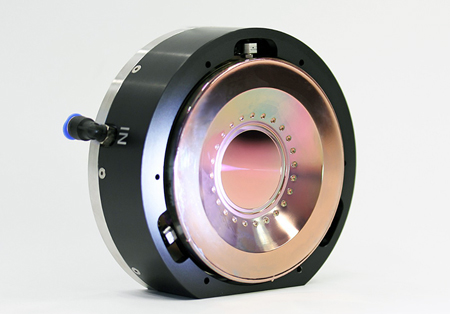 Very high power is needed to cut or weld using a laser beam. But this creates its own problem: the beam’s energy deforms the mirrors that are focusing it to a point. When this happens, the beam expands and loses intensity. A new type of mirror can deform itself so as to correct this unwanted deformation. It was first presented earlier this week at the Optatec trade fair in Frankfurt, Germany.

Lasers are used in manufacturing to cut materials or weld components together. Laser light is focused to a point using various lenses and mirrors; the smaller the focal point and the higher the energy, the more accurately operators can work with the laser.

However, it is well known that when the user turns up the power to increase cutting effects, the mirror also heats up, which causes it to deform. A deformed mirror cannot effectively focus the laser; the focal point gets bigger and controllable laser power actually falls away.

Scientists are working on ways of making the mirrors more temperature-resistant and getting rid of the deformation. However, this difficult undertaking only works up to a point. Researchers at the Fraunhofer Institute for Applied Optics & Precision Engineering in Jena, Germany, are pursuing a completely different approach. “We’ve developed a mirror that doesn’t prevent deformation by the laser, but corrects it,” explains Dr. Claudia Reinlein, from Fraunhofer IOF. “By deliberately heating up the mirror to a precisely controlled level, we balance out the unwanted deformation by the laser.”

Working with colleagues from Fraunhofer IKTS and Ilmenau University of Technology, the scientist designed a ceramic mirror with a copper layer on the front and built-in temperature sensors and filaments. When a laser beam heats up the mirror, the sensors detect the change. Software calculates how strongly the mirror is deforming from the heat and sends a corresponding current of electrical power through the filaments. These heat up accordingly and balance out the unwanted deformation.

On the back of the mirror, the researchers have fitted a piezoelectric layer that can also deform the mirror and correct all further errors that could disrupt the laser beam. The scientists have already developed a prototype of the mirror and are presenting it at the Optatec trade fair in Frankfurt am Main from May 20 to 22 (hall 3, booth D50). Currently the researchers still have to control the system manually, but the mirror should be able to correct deformations automatically in future.

Applications for the deformable mirror are not restricted to factories: satellites are also set to benefit from the breakthrough. If satellites collide with larger particles of dust, they can suffer serious damage. In the near future – around five to 10 years from now – a laser beam could protect them against such danger. If a high-power laser is directed at the dust particle, the beam can push the particle outward and change its path to avoid collision with the satellite.

However, one problem is that atmospheric turbulence can alter the laser beam, which is where the deformable mirror can come to the rescue. First the researchers send a beam from a separate laser into the atmosphere and analyze how the turbulence changes it. Based on this data, they can then deform the mirror using the filaments and a piezoelectric layer such that the laser beam hits the dust particle with just the right focus.