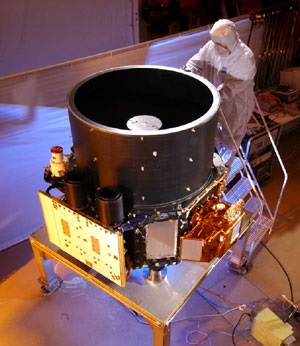 The “optical autocovariance wind lidar for aerosols winds and clouds” project, known as HAWC-OAWL for short, should give atmospheric and environmental scientists and climate modellers a much better understanding of how small particles are transported by wind, and how clouds are formed.

Cloud formation is acknowledged as one of the weaker areas of current climate modelling, and an improved understanding of the physical processes involved should ultimately lead to more accurate forecasts of climate change.

The existing OAWL technology is more than a decade old and has previously flown on NASA-funded test flights. However, the new three-year contract will see Ball adapt it with an additional laser wavelength and the multi-directionality needed to measure profiles of aerosol properties simultaneously with wind speed and direction.

Jim Oschmann, vice president and general manager for Ball's civil space and technology business unit, says that Ball has been developing this lidar technology since 2002. “We're eager to see it matured and flown again," he said. "This program will advance the instrument technology for future space-based global Earth system studies."

The HAWC-OAWL project is one of 17 technology proposals just selected under NASA's “Instrument Incubator Program” – which has been running since 1998 - to improve Earth observation measurements in a timely and cost-effective fashion.

Climate modelling uncertainty
Among the other projects selected are two lidar instruments being developed at the Langley Research Center – a multi-wavelength ocean profiling and atmospheric tool, as well as a triple-pulsed 2 µm lidar to monitor vertical concentrations of water and carbon dioxide.

Meanwhile the University of Colorado in Boulder is working on a compact solar spectral irradiance monitor, and a team at the University of Hawaii in Manoa is developing a thermal infrared imaging spectrometer for small satellites.

Ball's principal investigator on the project is Sara Tucker. Also based in Boulder, she said in a company statement: “The HAWC-OAWL measurements will help scientists better understand how co-located aerosols and winds interact in cloud formations. Understanding this interaction is critically important for predicting cloud properties and brightness.”

Tucker is due to present on the topic at next month’s meeting of the American Meteorological Society in Colorado. In her abstract, she states that clouds are “still the largest source of climate sensitivity uncertainty in climate models”.

Co-located measurements of aerosols and winds will help improve cloud representation in those models, Tucker adds, pointing out that the project will focus on how aerosols and winds affect cloud radiative forcing – a mechanism that plays a key role as a feedback process in global warming, because clouds reflect lots of sunlight but also trap some infrared radiation.

Additional wavelength
New technology in the HAWC-OAWL project includes 1064 nm wavelength backscatter and depolarization, which will add to the existing 532 nm and 355 nm channels.

Horizontal wind speed and direction profiles will be measured by integrating two telescopes with perpendicular line-of-sight perspectives on the wind fields, while the addition of a wavelength/polarization multiplexing system will mean that it can point in two directions at the same time.

The Technology Readiness Level (TRL) of the entire system will also be raised from TRL3 to TRL5, providing a packaged and qualified tool for both ground and flexible NASA aircraft operation.

In tests carried out three years ago, test flights at NASA’s Johnson Space Center demonstrated and validated the original, autonomous, airborne OAWL on a NASA WB-57 aircraft. The new system will be able to characterize airborne particles, while simultaneously measuring wind profiles to provide information seen as critical to the Earth's energy and water cycles, air quality and climate.