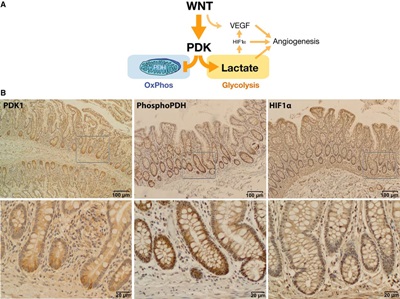 The work, led by the University of California, Irvine, and involving the Laboratory for Optics and Biosciences at École Polytechnique in Palaiseau, France, suggests a new way to inhibit the growth of tumors in the colon.

Irvine’s Marian Waterman and colleagues investigated in detail the way that cancer cells oxidize sugar differently to normal healthy cells. That there is a difference was first spotted back in 1956 by Otto Warburg, but its precise molecular nature has remained something of a mystery.

Now, thanks in part to FLIM, the team found that some particular changes in the so-called “Wnt” molecular signaling pathway is critical in the development of colon cancer cells and the blood vessels that feed them - something that could lead to new drug therapy for treating the disease.

Understanding cell metabolism
“Cancer cells have different metabolic demands than normal cells,” explains Waterman. “However, until now the molecular evidence for how this metabolic reprogramming takes place in cancers of the colon has not been very well defined.”

“Our results show that Wnt signaling plays an important role in establishing aerobic glycolysis as the predominant sugar-metabolizing pathway to support colon cancer. We have also been able to identify one of the key molecular targets for the Wnt signal in cancer cells.”

Wnt signaling is already known to be important in the development of many cancers, including colon cancer. However, the effects have been attributed to its action on the cell cycle. In the new work, the researchers wanted to investigate whether Wnt played another role in cancer, specifically on metabolism.

Using a Zeiss 710 microscope coupled to a Mai Tai ultrafast laser from Spectra Physics, they were able to image live cells, and reveal that blocking the activity of Wnt reduced glycolysis. That promoted a shift to sugar metabolism by the citric acid cycle, and reduced tumor growth. The researchers also identified the enzyme pyruvate dehydrogenase kinase 1 (PDK1) as one of the targets for Wnt activity related to its effects on metabolism.

New therapies possible
The results suggest a new approach for cancer therapies, through targeting the Wnt molecular pathway, and also that existing drugs may have more beneficial effects than had previously been thought.

“Just because a Wnt inhibitor or potential drug candidate shows no effect on cell division in one molecular test does not mean that it might not have beneficial effects for cancer treatment due to its impact on metabolism in another test,” said Waterman.

Aside from the ultrafast laser, the optical setup of the FLIM equipment included a 40×0.8 numerical aperture water immersion objective from Olympus. Images were acquired with a Becker and Hickl 830 card and two Hamamatsu photomultipliers, using a dichroic filter at 690 nm to separate the fluorescence signal from the laser emission.

The research team, who published the results of their study in The EMBO Journal, say that it also represented the first time that FLIM imaging has been used to detect metabolic changes in living, actively perfused xenograft tumors (i.e. those that have been transferred from one species to another).