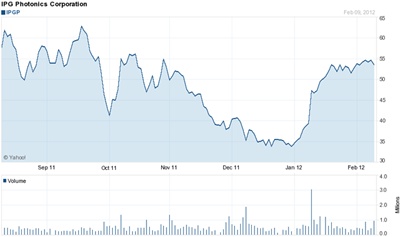 IPG Photonics saw its 2011 profit more than double from 2010, thanks to continued sharply rising demand for its high-power fiber lasers in materials processing applications.

Reporting the company’s full-year results, CEO and founder Valentin Gapontsev said that a 59% increase in total sales to $475 million in fiscal 2011 generated a pre-tax profit of $175 million. That represents a 120% increase from $80 million in 2010 and indicates the ongoing power of IPG’s vertically integrated model in a sector of the laser industry that it continues to dominate.

Those margins and a positive outlook for 2012, in which the company will seek to diversify its business with increased sales of quasi-CW and thulium-doped fiber lasers, as well as custom systems for selected applications, sent IPG’s share price up nearly 10% in early trading. The upward momentum continues a trend seen since late 2011, thanks to an apparent rebound in orders from the key Chinese market.

Last year saw strong penetration of the automotive industry for IPG’s lasers, with Gapontsev saying that the technology was now the “laser of choice” in car manufacturing, and that trends towards new materials for lighter bodies and improved fuel efficiency would increasingly benefit the company.

Responding to analysts’ questions, IPG’s CFO Tim Mammen suggested that hundreds of lasers had been shipped to major auto manufacturers during 2011, while stressing that there is plenty more headroom for the company to increase that figure. Using a baseball analogy, he described the level of penetration so far as “at first base”, with some in the industry still wary of laser technology in general after past failures. He said that IPG had now completed numerous deployments at three leading auto makers in Germany – home to its major competitors Trumpf and Rofin-Sinar.

Still cutting diode costs
IPG is continuing to cut the costs of its laser diode packages, with a 40% reduction expected this year, as it works to stay ahead of a growing number of competitors that are seeking to grab some market share in the fastest-growing sector of the laser industry.

Cutting diode costs is not quite such a competitive weapon these days, since the proportion of its cost in the laser’s bill of materials has been reduced over the past few years. Rofin, which is aiming to take some market share, is working hard to catch up in this respect, and has scheduled significant cuts to its own diode package costs for this year, partly through an increase in pump module power from 135 W to 200 W expected by April.

Examples of an expanding applications base for IPG’s high-power lasers include a recent sale of three fiber lasers for oil and gas exploration in Siberia, where Gapontsev says that the technology can cut the cost of drilling wells.

This year, IPG’s priorities will include cutting the cost of its relatively new quasi-continuous-wave (QCW) lasers, which have been designed to displace lamp-pumped YAG lasers. Sales of the QCW products grew strongly in 2011, but still represent only a tiny proportion of the company’s total revenues. Mammen thinks that there is the potential to sell thousands of the QCW lasers each year, and that the key to achieving that will be hitting the right price point – particularly in China.

Thulium doping for plastic welding
Another area of diversification is in high-power thulium-doped fiber lasers, which operate at the longer wavelength of 2 micron and are therefore suitable for processing plastics. The company showed off its new 1 kW thulium laser at last month’s Photonics West trade show, and with initial interest in welding applications and perhaps the potential for cutting in the longer term, IPG has high hopes of penetrating what would be a significant new market for laser materials processing.

Further recent introductions have included a 2 kW direct diode laser for cladding and surface treatment applications, where beam quality is not such a major issue, and an air-cooled 1 kW laser that is believed to be priced at only $70,000 and keeps a significant gap between it and challengers who are only just launching their first, water-cooled, kilowatt fiber lasers.

While concerns have been raised in some quarters about the level of vertical integration that IPG is now working on in non-optical components, the company still wields a powerful advantage in its profit margins compared with its competitors. In a recent research note, analyst Mark Douglass from Longbow Research wrote:

“We think IPG has sufficient headroom that it can drop prices to win business without suffering meaningful gross margin degradation.” Douglass does express some concerns about the longer term, but thinks that the firm has such a lead on price and in its first-mover status that it may grow twice as quickly as the wider industrial laser market over the next couple of years without compromising profitability.

Gapontsev and Mammen predicted that sales would be sequentially flat in the opening quarter of 2012, which is seasonally weak in general because of the Chinese New Year. And although there are no predictions for the full year at present, it is clear that the company is looking for another significant rise in sales, despite ongoing macroeconomic concerns.

“We are very optimistic about 2012,” the CEO concluded.