The high-tech research center receives more cash from the Flemish government, and agrees a five-year collaboration with the litho giant. 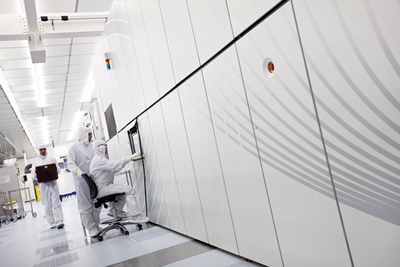 IMEC, the world-leading center for developing next-generation electronics technologies, has received a twin boost – more funding from the Flemish government to expand its research efforts, and a new five-year collaborative agreement with ASML that will advance extreme ultraviolet (EUV) lithography to commercial production.

The funding boost is part of a concerted effort by the local government in the Flanders region of Belgium, in which IMEC’s Leuven campus is located, to create a technology-driven local economy based on the concept of open innovation.

Ingrid Lieten, the Flemish Minister for Innovation, announced an increased budget for science and innovation in a speech at the IMEC campus, saying that by 2014 the region would have increased its structural spending on research and development by “at least €200 million”, compared with the 2011 level.

The staged increase will see an additional €60 million in funding in the government's 2012 budget for science and innovation, and further increases of “at least” €70 million in the two subsequent years. IMEC receives significant funding from the Flemish government, which contributed nearly €43 million to the center’s total turnover of €285 million in 2010. The exact increase in support for IMEC will be detailed in a new agreement between it and the government that should be signed before the end of this year.

Open innovation; sustainable entrepreneurship
The extra support from the government is intended to support IMEC as it expands its research in the fields of energy and healthcare, building on the chip technologies that it is best known for. IMEC also boasts some world-leading expertise in photonics, notably in the areas of photovoltaic cells, organic electronics and silicon photonics.

“Many of us talk about and are worried about our manufacturing moving to Asia,” Lieten said. “But it’s not only manufacturing, it also about technology development, about research, about innovation moving to Asia and their desire to move up the value chain.”

“To keep Flanders and Europe competitive, we need innovation leadership. We need open innovation. We need to build critical mass and bring the best brains from [around] the world together,” Lieten concluded. “Our aim is to change Flanders into an “open innovation center”, based on an innovation culture with an involvement of all stakeholders, and focusing on sustainable entrepreneurship.” 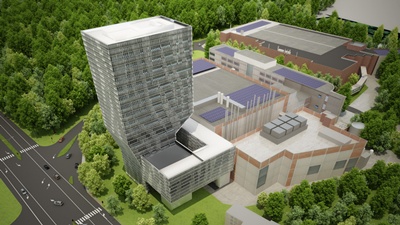 Tower of innovation
Established 27 years ago, IMEC has certainly succeeded in becoming a world-leading center for the development of semiconductor manufacturing technologies in particular. Thanks to recent funding through the Flemish government, it has also expanded its cleanrooms and is now constructing the “IMEC Tower” – a new 16-floor building with office space for 450 people and laboratories that it is hoped will become a symbol of that innovation culture. The tower is scheduled for completion in mid-2013.

One of the IMEC’s key areas of expertise is in cutting-edge semiconductor lithography; the research center provides chip manufacturers with an early insight into the capabilities of new production technologies and crucial feedback to tool developers such as ASML.

IMEC and ASML have also just signed a new five-year collaborative agreement that will be largely focused on the development of EUV lithography as it nears a commercial entry - following years of research and a number of frustrating delays.

Under the new agreement, ASML will install one of its first production-ready EUV lithography systems, the NXE:3300B, at IMEC, as well as a suite of computational lithography tools and an advanced metrology platform. “We now represent the largest lithography expertise center in the world,” IMEC claims.

Martin van den Brink, ASML’s chief products and technology officer, said of the new agreement: “We’re pleased to commit to the next level of collaboration as we transition to EUV technology and so enter the next decade of shrink technologies.”

• IMEC says that it has now qualified a chipset of custom high-quality EUV sensors that are seen as an important technology for ASML’s forthcoming EUV lithography tools. The sensors are designed to help calibrate, align and focus the novel lens systems used to direct EUV radiation to the semiconductor wafer.

Those sensors are now being integrated with ASML’s pre-production NXE:3100 EUV tools, while qualification of some different sensors to monitor EUV dosage in the company’s production-ready NXE:3300 systems is targeted by the end of 2011.