Zetawatt-Equivalent Ultrashort pulse laser System is most powerful in the US. 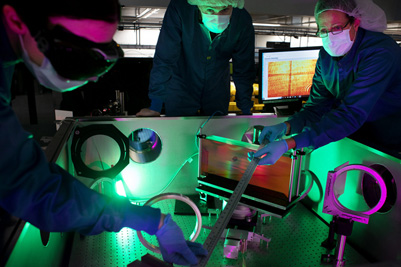 Researchers at the NSF ZEUS laser facility in a Michigan Engineering lab.

The laser that will be the most powerful in the United States is preparing to send its first pulses into an experimental target at the University of Michigan. Funded by the U.S. National Science Foundation, it is expected to become a destination for researchers studying extreme plasmas around the U.S. and internationally.

Called ZEUS, the Zetawatt-Equivalent Ultrashort pulse laser System, it will explore the physics of the quantum universe as well as outer space, and it is expected to contribute to new technologies in medicine, electronics and national security.

“ZEUS will be the highest peak power laser in the U.S. and among the most powerful laser systems in the world. We’re looking forward to growing the research community and bringing in people with new ideas for experiments and applications,” said Karl Krushelnick, director of the Gérard Mourou Center for Ultrafast Optical Science, which houses ZEUS, and the Henry J. Gomberg Collegiate Professor of Engineering.

The first target area to get up and running is the high-repetition target area, which runs experiments with more frequent but lower power laser pulses. Michigan alumnus Franklin Dollar, an associate professor of physics and astronomy at the University of California Irvine, is the first user, and his team is exploring a new kind of X-ray imaging.

They will use ZEUS to send infrared laser pulses into a gas target of helium, turning it into plasma. That plasma accelerates electrons to high energies, and those electron beams then wiggle to produce very compact X-ray pulses. Dollar’s team investigates how to make and use these new kinds of X-ray sources. Because soft tissues absorb X-rays at very similar rates, basic medical X-ray machines have to deliver high doses of radiation before they can distinguish between a tumor and healthy tissue, he said.

But during his doctoral studies under Krushelnick, Dollar used ZEUS’s predecessor to image a damselfly, showing the promise of laser-like X-ray pulses. Different soft tissues within the damselfly’s carapace delayed X-rays to different degrees, creating interference patterns in the X-ray waves. Those patterns revealed the soft structures with very short X-ray pulses—and hence small doses. In this first run, the ZEUS team is starting at a power of 30 terawatts (30 trillion watts), about 3% of the current most powerful lasers in the U.S. and 1% of ZEUS’s eventual maximum power.

Dollar’s team plans to return late in the fall of 2022 for another run, aiming for the full power intended for the high repetition target area, 500 terawatts. The maximum power of 3 petawatts, or quadrillion watts, will go to different target areas to be completed later. The first test using the target area for ZEUS’s signature experiment is anticipated in 2023. That experiment will use the laser to generate a beam of high-speed electrons and then run the electrons directly into the laser pulses. For the electrons, that simulates a zetawatt laser pulse—a million times more powerful than ZEUS’s 3 petawatts.

“Magnetars, which are neutron stars with extremely strong magnetic fields around them, and objects like active galactic nuclei surrounded by very hot plasma—we can recreate the microphysics of hot plasma in extremely strong fields in the laboratory,” said Louise Willingale, associate director of ZEUS and an associate professor of electrical and computer engineering.