TU Vienna and FHI Berlin say new information is obtained – that none of the methods alone could reveal. 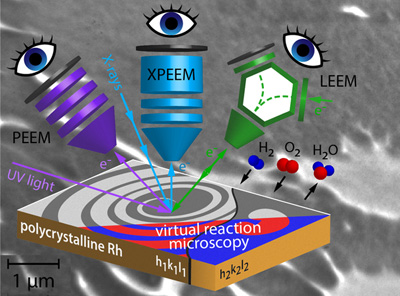 The eyes have it: concept of correlative microscopy.

Various microscopy techniques exist to monitor catalyzed chemical processes on such surfaces. They use, for example, ultraviolet light, X-rays or electrons. But no single method alone provides a complete picture, argue a research group from TU Wien (Vienna), Austria, and the Fritz Haber Institute in Berlin, Germany.

They have developed a novel approach that allows such observations to have “triple eyes” on a catalytic reaction – meaning the simultaneous use of three different types of surface microscopy.

By this means, they have been able to show that during the catalytic conversion of hydrogen and oxygen into water, reaction fronts on the crystal surface not only form remarkable geometric patterns, but they have also discovered “a new mechanism of the propagation of these fronts”.

The team commented that this approach is advantageous, “especially for climate-relevant technologies such as ecologically clean hydrogen-based energy production, a comprehensive understanding of such processes is crucial”.

Their work is described in the journal ACS Catalysis.

Different measurements from a single scope

“Many scientific questions can only be answered by combining different microscopy methods on the same sample, which is called correlative microscopy,” said Prof. Günther Rupprechter, from the Institute of Materials Chemistry at TU Wien. “However, this usually comes with limitations. You have to remove a sample from one instrument and perform the same experiment again in another microscope.”

Often, for methodological reasons, the experimental conditions are then completely different – some measurements take place in a vacuum, others in air. Often temperatures are different. In addition, an observer may not be looking at the same spot on the sample with different instruments, which can also influence the results. Thus, says Rupprechter, it is difficult to combine the results of different measurements in a reliable way. 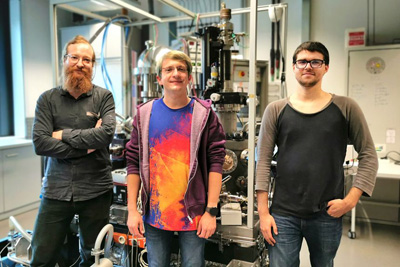 In UV-PEEM and X-PEEM, the sample surface is illuminated with ultraviolet light and X-rays, respectively. In both cases, it results in electrons being emitted from a surface. In a similar way to how light beams are focused in an optical microscope, the electron beams form a real-time image of the surface and of the processes taking place.

In an X-PEEM, one can additionally filter the emitted electrons according to their energies and thereby determine the chemical composition of the sample surface. Access to the necessary high-energy, high-intensity X-rays was provided to the research team by the Berlin synchrotron (HZB BESSY II).

In the LEEM technique, the surface is irradiated with an electron beam. The electrons that are backscattered from the surface create the real time image of the sample surface and of the ongoing processes, such as a catalytic reaction.

Since all three microscopies use different imaging mechanisms, this allowed to study different aspects of catalytic hydrogen oxidation on a structurally identical site of the sample, explained Prof. Yuri Suchorski, who has been involved in surface microscopy since 1974.

“In addition, the X-PEEM technique provides chemical contrast and therefore allows us to correlate the pattern formation on the surface with the chemical composition of the surface and the reactants present on the surface, hence the term correlative microscopy,” Suchorski said.

The group has studied the oxidation of hydrogen on structurally well-defined microscopic regions of a rhodium foil in a versatile way and in real time. They observed that the reaction “spreads over the surface like a wave, revealing a new kind of pattern formation that had never been encountered before”.

Rupprechter said, “In front of the spreading reaction front, new small islands of catalytically active areas form, accelerating the propagation of the reaction.”

In computer simulations that provide virtual reaction microscopy, the team was able to model and explain the formation of these islands.

The oxidation of hydrogen to water by solid catalysts is one of the significant processes that enable energy generation without combustion and without pollution (the exhaust gas consists of pure water), such as in fuel cells.

For future developments of new green energy production technologies, it will be important to watch ongoing catalytic reactions at work with several eyes in order to deeply understand fine details of the catalytic processes.