University of Tabriz employs three-core fiber to measure magnitude and direction of curve. 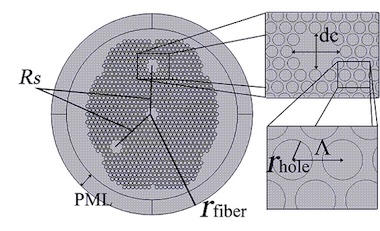 Assessing spinal curvature is one of the key aspects of diagnosing back pain and related disabilities, and deformation of the vertebral column (VC) can cause anything from minor pain to immobility.

Existing methods for measuring VC curves include mechanical measurement by doctors, sometimes with computer-assisted classification of the results, but this is time-consuming and prone to human error. Basic optical sensor techniques have also been used, but cannot always quantify the curvature.

A project at Iran's University of Tabriz has now developed an alternative and more sophisticated optical device, using a three-core photonic crystal fiber (TCPCF) as a vector bending sensor for measuring spine curvature. The findings were published in SPIE Optical Engineering.

The project's TCPCF contains three hexagonal cores, each with the same properties and each 9 microns in diameter. When the fiber is bent, mechanical stress changes the refractive index of the fiber, and these nonlinear changes affect the wavelength of light being transmitted through the fiber.

When the fiber is attached to a patient's VC, the magnitude of the spine's curvature can be estimated based on the difference between the wavelengths of the input and output light in a single core, once suitable calibration tables have been created.

A three-core structure allows the direction of curvature to be measured as well as the magnitude, according to the project team, by monitoring the relative position of the three cores and their asymmetric geometry. If each of the fiber cores is bent a little differently, then comparing the wavelengths of the output light from the two outermost fiber cores makes it possible to calculate the directional component of the bending.

A tool for doctors to use

"In general, one of the challenges of designing a sensor is the output relation of the sensor with the value it is sensing," commented Somayeh Makouei from the University of Tabriz.

"A non-linear relation between the measured item and output would be undesirable, and one significant advantage of this fiber is that it shows linear results in the output. Also, the length of the curve being measured is one of the constraints in the curvature measurement sensors, especially in optical ones. The proposed fiber does not have any limitations on the length of the curve that is to be measured."

In simulation trials, the TCPCF sensor achieved a sensitivity of about 1.22 picometers per meter in all rotation directions, said to represent a substantial improvement over conventional optical fiber sensors. It was able to sense a range of curvature from +12 to -12 degrees.

The sensor also has the advantage of being intrinsically based on wavelength modulation, noted the project, rather than on modulations in the intensity of the light traveling in the fiber.

"Intensity-modulated sensors are prone to noise from power fluctuations of the light source, a problem that severely hinders such sensors," noted the project. "We hope for further research and design improvements to lead to a convenient and reliable tool for doctors to use."