Award of $18 million will support proposed studies of extreme plasmas. 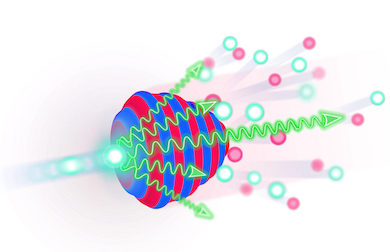 The ZEUS laser facility at the University of Michigan has been awarded a further $18.5 million by the National Science Foundation (NSF), as preparations for the laser to begin its work in early 2022 continue.

Set to be the most powerful laser in the US, ZEUS (from Zettawatt-Equivalent Ultrashort pulse laser System) is a 3-petawatt multi-beam platform designed to explore nonlinear quantum electrodynamics, relativistic plasmas, and other phenomena in high-field science.

The ZEUS project was created in 2019 through an initial $16 million of NSF funding to Michigan's Center for Ultrafast Optical Science (CUOS), the interdisciplinary lab established by Gérard Mourou.

ZEUS represents an upgrade to the Center's existing HERCULES platform, which is capable of reaching peak powers in the 500-terawatt range. It also represents a wish on the part of the US to keep pace with high-energy laser platforms being developed in other countries.

Experiments at the facility are expected to contribute to the understanding of how the universe operates at the subatomic level, how astrophysical phenomena such as jets can be produced by black holes, how materials change on extremely fast timescales, and to the development of smaller and more efficient particle accelerators for medical imaging and treatment.

“We are really looking forward to the exciting experiments that this new facility will make possible,” said Karl Krushelnick, director of CUOS.

Pushing the frontiers of technology

ZEUS is designed to be as versatile as possible, through a multiple-beamline architecture including a beam operating at 2.5 PW and another at 500 TW.

According to CUOS literature, pulses of several hundred TW from one beam can be used to accelerate electrons to GeV energies through the phenomenon termed wakefield acceleration, in which a laser pulse traveling in a plasma drives a strong wave behind it.

If multi-PW laser pulses from the other beam are then tightly focused onto that electron stream, the apparent power of the focused laser pulse is boosted into the zettawatt range. A 3-petawatt single beam mode will also be made available from the ZEUS platform.

"Laser wakefield accelerators may be able to miniaturize high-energy-physics particle accelerators to the tabletop scale, and enable new sources of ultrafast, extreme brightness and precise x-rays for applications from life-sciences to physics and engineering to industry," commented the ZEUS project.

ZEUS is then expected to operate as the most powerful laser in the US and as an open user facility for at least a decade.

"We look forward to the greatly increased capability and access to the highest intensity lasers that the NSF ZEUS user facility will provide for the US and international scientific community," said Vyacheslav Lukin, NSF program director for plasma physics. "Users of the facility will be able to explore a wide range of phenomena while pushing the frontiers of technology."