...and University of Strathclyde devises ‘simple’ way of sculpting matter into complex shapes by laser. 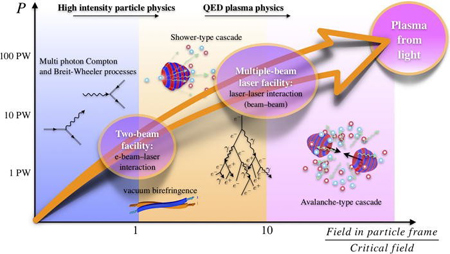 Timeline of the QED-plasma studies envisioned as a three-stage process.

The researchers plan to develop a roadmap for studying strong field quantum electrodynamics phenomena – like gamma-ray bursts or pulsar magnetospheres – which are not yet fully understood by the scientific community. They describe the research goals and cooperation model as “unique” due to the results that are expected.

The U.S.-based side of the collaboration will be led by Alec Thomas, professor of nuclear engineering and radiological sciences at University of Michigan, and Stepan Bulanov, staff scientist at Lawrence Berkeley National Laboratory.

At ELI Beamlines, Bulanov and Grittani will set up a team to work on the focusing of a laser beam on a single tiny spot to generate an extreme electromagnetic field that will accelerate particles to almost the speed of light and produce a bright gamma-radiation source.

The gamma rays colliding with a strong electromagnetic wave will transform into matter-antimatter particles creating matter from light. The researchers will use these experiments to understand how different types of antimatter can be created, and how even more extreme laser intensities can be studied. 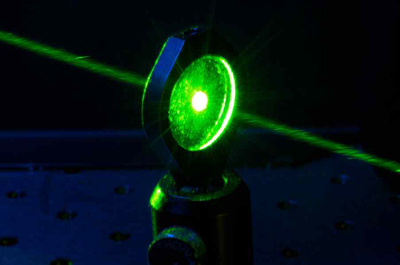 A new method for shaping matter into complex shapes, with the use of ‘twisted’ light, has been demonstrated in research at the University of Strathclyde, Glasgow, UK.

The team notes that when atoms are cooled to temperatures close to absolute zero (-273 degrees C), “they stop behaving like particles and start to behave like waves.”

Atoms in this condition, which are known as Bose–Einstein condensates (BECs), are useful for purposes such as realisation of atom lasers, slow light, quantum simulations for understanding the complex behaviour of materials like superconductors and superfluids, and the precision measurement technique of atom interferometry.

The work is described this week in Physical Review Letters.

Grant Henderson, a PhD student in Strathclyde’s Department of Physics, is lead author on the paper. He commented, “By shining a laser beam on to a BEC, we can influence how it behaves. When the laser beam is ‘twisted,’ it has a helical phase profile and carries orbital angular momentum (OAM). Laser beams with OAM can trap and rotate microscopic particles, behaving like an optical spanner.

He added, “This method of shining twisted light through ultracold atoms opens a new and simple way of sculpting matter into unconventional and complex shapes. It has the potential for the design of novel quantum devices such as atomtronic circuits and ultra-sensitive detectors.”