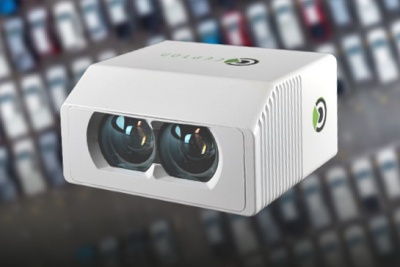 Cepton, one of several Nasdaq-listed lidar companies targeting the emerging market for automotive applications, says that key partner Koito Manufacturing has signed a non-binding pledge to fund the firm with up to an additional $100 million.

San Jose-based Cepton, which completed a $172 million special-purpose acquisitions company (SPAC) listing in January 2021, says that the support from Koito will fund its next stage of growth, as it aims to scale production for mass deployment.

Headquartered in Japan, Koito is a major provider of automotive lighting. It has previously invested $100 million in Cepton - an initial $50 million in February 2020, and another $50 million last year.

According to a US Securities & Exchange Commission (SEC) filing detailing the latest Koito investment, the Japanese firm currently owns just under 13 per cent of Cepton, and accounted for more than 44 per cent of Cepton’s total revenues in the first half of this year.

Cepton’s latest financial results, for the three months ending June 30, showed that - like several other lidar developers - it was still burning through cash rapidly. For the first half of 2022, it posted an operating loss of $32 million on sales of just over $4 million.

Yole market report
Commenting on the latest Koito support, Cepton co-founder and CEO Jun Pei said: “From receiving our ADAS series production design win to becoming a publicly traded company, Koito has been with us throughout our journey, and I look forward to achieving many more milestones together in the years to come.”

Koito president Michiaki Kato said that the two firms were now preparing together for the mass deployment of lidar solutions, adding: “We expect our latest proposed investment to help strengthen Cepton’s financial position and solidify Koito’s commitment in lidar as a crucial component in both automotive and non-automotive applications.”

Meanwhile market researchers at Yole Intelligence have published their latest analysis of the lidar market, with the headline finding that companies in China are now leading in automotive applications.

Pierrick Boulay and Alexis Debray from Yole suggest that the market for automotive and industrial applications of lidar will grow from $2.1 billion in 2021 to $6.3 billion in 2027 - with much of that impetus provided by automotive uses.

Worth only $38 million in 2021, the market for advanced driver assistance solution (ADAS) lidar applications is set to boom to $2 billion, states the report. 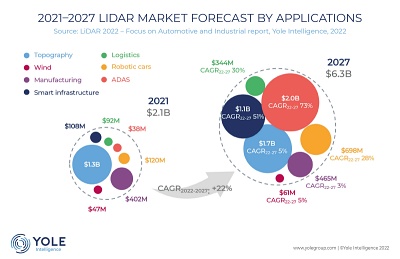 Hitronics, already with 1700 employees, designs and manufactures optical components, optical systems, receivers, and lasers. “In 2022, the company will offer auto-grade 1550 nm fiber lasers for lidar, with a manufacturing capacity of 250,000 units per year,” Yole says.

Design wins
The analyst team also points out a significant difference between Chinese and foreign lidar companies, something that they believe could be decisive in the impending transition to mass production.

“Although foreign lidar companies rely on external manufacturing, RoboSense and Hesai have developed manufacturing capacities in which they will have more control in achieving large-volume production,” they report. Cepton has agreed a partnership with packaging expert Fabrinet to produce its "Vista-X90" lidar units.

The Yole findings contrast with a recent report from another analyst company. Last month Strategy Analytics tipped Israel’s Innoviz Technologies, which has signed a major deal with auto giant Volkswagen, to become market leader in the emerging scene.

Back in May, Tel Aviv-based Innoviz said that it had signed a supply agreement with an unspecified customer that boosted its forward-looking order book by some $4 billion.

That customer has subsequently been revealed as CARIAD, which is owned by Volkswagen and will use the “InnovizTwo” sensor for ADAS and autonomous driving applications.

The Strategy Analytics report also noted a key win for Cepton, which has agreed a deal with General Motors, and Luminar’s agreements with Volvo, Mercedes, and Nissan - with initial deployments anticipated next year.