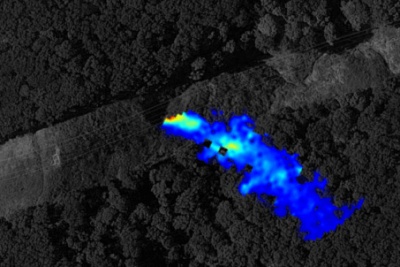 In a release from Bridger, Will Price from Next Frontier Capital said: “It's incredible…Bridger is literally changing the world from right here in Bozeman.

“Having seen ‘under the hood’, this is an amazing company and amazing team, and we believe the sky's the limit for how far we can go together.”

Bridger's CEO and co-founder Pete Roos added: "We are beyond excited to share the next stage of our journey with investors from right here in Montana that share our passion for sustainability.

“This group of investors knows how to guide Bridger to the next level. And you know, this group just feels right.”

Technology options
Various photonics techniques can be used to detect methane. UK-based QLM Technologies has developed single-photon cameras that have been trialled by oil giant Total, while researchers at the US National Institute for Standards and Technology (NIST) are working on a system based around an optical frequency comb.

“This information is used by energy companies to efficiently reduce their methane emissions,” claims the firm, boasting a client base that includes the likes of ExxonMobil, Southern California Gas Company, Diversified Energy, Devon Energy, Cenovus Energy, and Chesapeake Energy.

Methane is acknowledged as a key greenhouse gas that has a particularly potent impact on the climate despite its relatively small atmospheric concentration when compared with carbon dioxide.

On the plus side, methane does not linger in the atmosphere for nearly as long as carbon dioxide, meaning that efforts to mitigate emissions and leaks of the gas can have a more rapid impact than CO2 mitigations.

Last month Bridger revealed that it had signed an agreement with Spanish petrochemical and energy giant Repsol that will see the airborne methane lidar deployed in the Marcellus Shale area in New York State - one of the world’s largest natural gas fields and now a major location for fracking.

Identifying urban leaks
Bridger says that its aerial scanning technology efficiently covers large areas, and is able to detect more than 90 per cent of methane emissions in typical production basins.

“After the laser scans are complete, Bridger provides digital maps and other data to quickly identify and prioritize repairs to eliminate the hidden methane leaks,” explains the firm.

“This allows companies to baseline and track their total emissions over time to achieve their emissions reduction targets.”

The approach is seen as particularly relevant for implementing third-party gas certification, with Repsol saying that it will seek independent certification of its natural gas extraction from the Marcellus Shale through the non-profit certification body, MiQ.

While that 90 per cent detection rate is seen as effective for gas production activities, Bridger says that the higher sensitivity of its latest “GML 2.0” lidar system will enable a broader range of applications.

“More sensitive detection capabilities are useful within the distribution sector and for catching abandoned or orphaned wells,” states the company on its web site. “We’re now testing to determine the probability of detection that the GML 2.0 sensor will achieve for methane emission sources at 0.2 kg per hour under typical conditions.”

That kind of detection benchmark is seen as important for uncovering “Grade 1” leaks in urban gas distribution networks, and for uncovering the high-emitting abandoned wells that need plugging.