First Solar to beef up US manufacturing capacity

Maker of CdTe modules plans $1.2BN investment, with new domestic site expected to be operational in 2025. 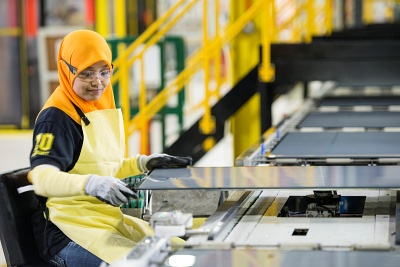 US-based solar panel maker First Solar says it will invest a further $1.2 billion scaling up its domestic production capacity, thanks largely to the recent passing of the Inflation Reduction Act.

That total includes an estimated $1 billion for a brand new facility somewhere in the southeastern US, while close to $200 million is being earmarked for an expansion at its existing plant in Ohio.

The Tempe, Arizona, firm reckons that the moves will elevate annual production of its thin-film cadmium telluride (CdTe) technology to around 10 GW (dc) in the US by 2025.

First Solar also has large facilities in Malaysia and Vietnam, and is busy building additional capacity in India currently. Its global capacity is slated to reach 20 GW (dc) in the same time frame.

The US investment is expected to add at least 850 new manufacturing jobs, with the company representing the only US-headquartered business in the world’s top-ten manufacturers of solar PV modules.

Vertical integration
First Solar’s CEO Mark Widmar said in a company release: “In passing the Inflation Reduction Act of 2022, Congress and the Biden-Harris Administration has entrusted our industry with the responsibility of enabling America’s clean energy future and we must meet the moment in a manner that is both timely and sustainable.

“This investment is an important step towards achieving self-sufficiency in solar technology, which, in turn, supports America’s energy security ambitions, its deployment of solar at scale, and its ability to lead with innovation.”

Updating investors during a conference call last month, Widmar said that the company currently had a record backlog on its order book, totalling more than 44 GW (dc).

Designed and developed at its research centers in California and Ohio, First Solar’s thin-film CdTe modules are based around a completely different material to the vast majority of silicon-based solar panels seen around the world, which are mostly fabricated in China.

The latest manufacturing push from First Solar will represent the firm’s fourth vertically integrated factory in the US, which will have a planned annual capacity of 3.5 GW (dc).

It remains contingent upon the approval of various federal, state, regional, and local incentives, but is currently expected to commence operations in 2025.

According to a report published by industry analysts at Solar Media earlier this year, First Solar ranked seventh on its list of the world’s largest PV module makers, by shipment volumes.