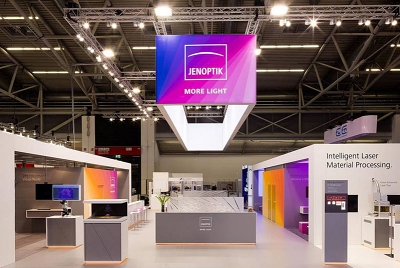 Optics and photonics technology giant Jenoptik has increased its sales expectations for 2022, following a sharp rise in orders.

The Jena-headquartered company says that it now expects to post sales of between €930 million and €960 million this year.

Revealing the new targets Jenoptik CEO Stefan Traeger said: “Jenoptik continues to perform very well in an overall challenging environment. In the second quarter, we posted not only appreciable improvements in revenue and profitability, but also a very strong order intake and backlog.”

The sales performance is also expected to translate to the bottom line, with the company now anticipating an earnings before interest, tax, depreciation, and amortization (EBITDA) margin of just over 18 per cent - assuming that Russia’s invasion of Ukraine, and the potentially severe disruption that could result from constrained supplies of Russian gas this winter, does not escalate further.

Photonics division boosts first-half figures
For the second quarter of 2022, Jenoptik reported sales of €239 million, up 34 per cent on the same period last year. Orders grew even faster, rising 45 per cent year-on-year to €298 million.

That growth picture reflects particularly good performance from Jenoptik’s “advanced photonic solutions” business unit, which has posted a 54 per cent jump in sales for the first half of 2022 alongside higher profitability.

Companies acquired in 2021 - most notably SwissOptic and Berliner Glas Medical (now known as Jenoptik Medical) - contributed €73 million to the division's first-half total of €342 million, indicating that the underlying business grew by 20 per cent year-on-year.

And with divisional orders up more than 55 per cent from last year, the near-term future looks even stronger.

Jenoptik’s buoyant outlook for its own business contrasts sharply with the negative macroeconomic sentiment expressed in the firm’s latest quarterly presentation, which characterizes recent developments as “increasingly gloomy” - the result of business contraction in the US, zero-Covid policies in China, and supply-chain constraints in Germany.

”Crisis-proof” photonics
Jenoptik noted that its high order backlog could not be worked off as planned in the latest quarter, due to material bottlenecks, and warned of the growing impact of high energy prices on manufacturing.

However, the company also pointed out that the photonics sector has shown itself to be “considerably more crisis-proof” than other industries in recent years.

As a result, the firm’s advanced photonic solutions division now boasts an order backlog standing at more than half a billion euros, while Jenoptik is investing heavily at its new complex in Dresden to increase production of micro-optics and sensors.

Construction of the state-of-the-art facility close to Dresden airport is due to commence before the end of 2022, with production slated to begin in early 2025.

Jenoptik pointed out that despite the significant spending on that facility, its advanced photonics division was still able to post virtually the same positive cash flow as it did last year.

In contrast, the firm’s non-photonics portfolio companies posted lower revenues, earnings, and orders - largely a result of the continued impact of the Covid pandemic, supply chain bottlenecks, and structural issues in the automotive sector.