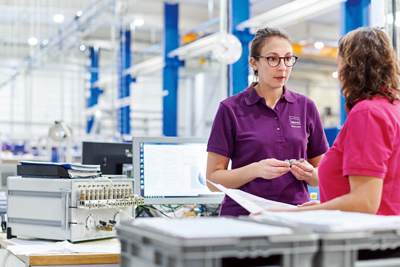 Diversified photonics company Jenoptik has just reported its latest trading figures that indicate a “record” second quarter despite the challenging environment still influenced by the pandemic. With group revenue up nearly 30 percent and a pre-tax earnings (EBITDA) margin of more than 25 percent, the company this week said it has reached “new all-time highs”.

Announcing the results, Stefan Traeger, Jenoptik’s President & CEO, commented, “Based on these strong results and the positive prospects for the remainder of the year, we are well on track to achieve our recently-increased targets for 2021.”

He also remarked on the performance of Trioptics, acquired by Jenoptik in July 2020, which marked “an important step forward in our growth strategy, which combines organic growth and acquisitions. Based on these strong results and the positive prospects for the remainder of the year, we are well on track to achieve our recently increased targets for 2021.”

Due to a sustained recovery in demand in the firm’s three photonics divisions – Light & Optics, Light & Production, and Light & Safety – Jenoptik posted a strong increase in order intake in the first six months of 52.2 percent, to €508.4M (prior year’s H1: €333.9M). Despite a pick-up in demand in the second quarter, the order intake at Vincorion – the division that supplies mechatronics solutions to the defense and aerospace sectors – was still down on the prior year after six months.

In the first half of 2021, Jenoptik generated revenue of €389.3M, 18.3 percent more than in the prior year (€329.0M), in the second quarter revenue grew by 29.6% over the prior year. Strong organic growth and the contribution from Trioptics led to an appreciable increase in revenue in the Light & Optics division in the first six months of 2021.

While the Light & Production division benefited from an upturn in demand from the automotive industry and business at Vincorion also picked up slightly, revenue in Light & Safety was down on the prior year. Trioptics was the main contributor to the significant increase in revenue in the Asia/Pacific region. The share of revenue generated abroad remained unchanged at 74.2 percent. 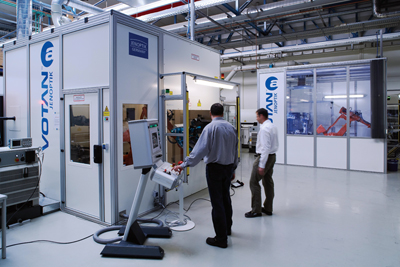 As of June 30, 2021, Jenoptik had what it described as a “healthy and robust” balance sheet and financing structure for growth. Cash flows from operating activities came to €26.0M, while free cash flow of €11.6M was “solid, as expected” but down on the prior-year’s €16.0M.

“We have a healthy balance sheet and very good financial resources to manage our planned future growth. We will push on with our strategy of organic growth, and we have sufficient firepower to take advantage of further opportunities for external expansion,” said Hans-Dieter Schumacher, Chief Financial Officer.

In the Light & Optics division, strong momentum in the semiconductor equipment business and substantially increasing demand in the Biophotonics and Industrial Solutions areas from the first quarter continued, the company stated. Triptics contributed €41.0M to revenue. Accordingly, the revenue of the division improved by 48.6%, to €207.3M in the first six months of 2021. EBITDA followed this trend and more than doubled to 65.5 million euros (prior year: 30.0 million euros).

In the Light & Production (L&P) division, signs of recovery in the automotive industry became apparent, particularly in the second quarter. Despite this, the impacts of the pandemic – the lower order backlog at the beginning of 2021 – have not yet been fully overcome, the company said. In total, L&P revenue came to €78.0M at the end of June, 7.5% up on the prior year.

In the Light & Safety division, there was strong demand for traffic safety solutions, which led to significant increase in order intake. Business in the Light & Safety division is predominantly project-based. Due to delays in the supply of electronic components, fewer deliveries were made than planned, and new orders came in later than originally expected. This resulted in a 23.2-percent fall in revenue, to €42.8M, in the first half of 2021 (prior year: €55.7M).

In the first half of 2021, Vincorion generated revenue of €60.0M, slightly above the prior-year figure of €58.8M. While demand in the Energy & Drive area grew, revenue declines were posted in Power Systems and the business with the aviation industry. Compared with the first quarter, this division’s revenue increased significantly in the second quarter. As a result of the cost-cutting measures also successfully implemented at Vincorion, EBITDA improved from €4.1M to €6.3M.

On the basis of the company’s performance in the second quarter of 2021, Jenoptik, in July, significantly raised its full-year guidance. In addition, a one-off effect in EBITDA of around €16M arising from the acquisition of Trioptics will also contribute to the margin increase. Revenue is expected to come in at between €880M and €900M in the 2021 fiscal year (previously: revenue growth in the low double-digit percentage range / prior year: €767.2M).