German photonics giant predicts 20% sales growth in 2022 after a jump in orders. 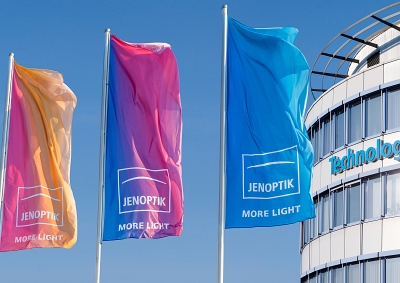 Jenoptik is expecting its sales revenues to rise by at least 20 per cent this year, thanks to strong demand across all of its core photonics-related business activities.

The Jena-headquartered company posted sales of €751 million for 2021, up 22 per cent on a like-for-like basis (i.e. not including the €145 million total from the "Vincorion" mechatronics business), and provided that Russia’s invasion of Ukraine does not escalate further, it expects profitability to improve this year as well.

CEO Stefan Traeger said: “On the back of a good order situation, a well-filled project pipeline, and ongoing promising developments in the core photonics businesses, we are confident of achieving revenue growth of at least 20 per cent and further improving profitability in our continuing operations in 2022.”

He added that the latest developments put Jenoptik “fully on track” to achieve its targeted group revenue figure of €1.2 billion by 2025, alongside an earnings before interest, tax, depreciation and amortization (EBITDA) margin of close to 20 per cent.

That effort will come amid the latest restructuring of the company, which will now be divided into business units more clearly defined as “photonics” and “non-photonics” in nature.

E-beam investment
Within the existing divisional structure, Jenopik’s “light and optics” business segment is benefiting most from the current boom in demand - and from the semiconductor industry in particular.

The Trioptics business is now included in this segment, and contributed just under €100 million in sales as the divisional total rose by more than 40 per cent in 2021, to €461 million.

But the semiconductor industry remains the main driver of growth, and with that in mind Jenoptik says it is investing in a new electron-beam lithography tool expected to go into operation at its Dresden site in mid-2022.

“It will be a core element for the development and production of the most sophisticated next-generation precision sensors, which are essential for the further development of DUV [deep ultraviolet] and establishing high-precision EUV [extreme ultraviolet] wafer exposure in semiconductor production processes,” stated the firm in its annual report.

Restructuring
Meanwhile, Jenoptik’s “light and production” business unit, which has a strong focus on the automotive industry, and includes lasers for materials processing, posted annual sales of €176 million - almost exactly the same figure for 2020.

Things already look better for 2022, however, with Jenoptik reporting “improved sentiment” in the automotive industry, and a 20 per cent rise in divisional orders including particularly strong demand for laser processing equipment.

The latest restructuring will see Jenoptik combine the “light and optics” and “light and production” business segments to form a single unit called “advanced photonic solutions”.

The former “light and safety” division, which is largely focused on road traffic monitoring systems, will become known as “smart mobility solutions”.

Jenoptik’s non-photonic activities, particularly with respect to the automotive market, will be separated as “non-photonic” companies within the group structure, and managed as independent brands.

The company is still in the process of selling the Vincorion business, which is set to be acquired by a private equity buyer later this year - and increase the overall focus on photonics technologies.

Better balance
Commenting on those developments in Jenoptik’s annual report, CFO Hans-Dieter Schumacher added: “Our structure will simplify. Jenoptik is developing from a diversified group into a pure photonics player that will generate approximately three quarters of its revenue in the ‘advanced photonic solutions’ division in 2025.”

That new business unit will combine activities in sectors as diverse as semiconductors and electronics, life sciences and medical technology, and optical metrology.

“This set-up will allow us to achieve a better balance between cyclical and less cyclical operations,” Schumacher said, with Traeger adding:

“Since December, BG Medical (now called Jenoptik Medical) and SwissOptic have strengthened our activities in the areas of medical technology and metrology as well as in semiconductor equipment.

“For 2022, we expect additional revenue of around €130 million from the acquisition, with attractive margins.”

Regarding the wider macroeconomic and geopolitical situation, Jenoptik’s annual report highlighted the war in Ukraine and China’s inflexible “zero Covid” pandemic response as two of the major risks to global trade and supply chains.

“Our [anticipated] growth pre-supposes that the Ukraine conflict - with the sanctions that have been implemented and potential impacts on price developments and supply chains - does not escalate further,” stated the firm.