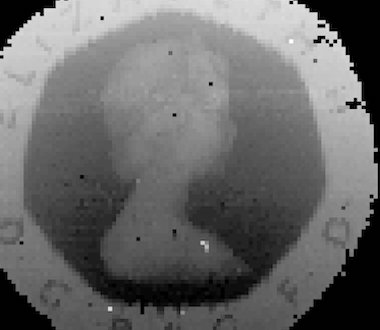 The power of two: finer details

A project at the University of Glasgow has developed a version of lidar potentially able to create 3D images with micron-scale resolution, compared to the millimeter-scale performance conventionally achieved.

This would take lidar resolution down towards that of OCT platforms, and the principle behind the improvement stems from the project's study of recent developments in "quantum OCT" techniques, which gain their time-of-flight information from correlating events at two single-photon detectors.

As described in Optics Express, the Glasgow project explored the potential for using two-photon interference between weak coherent states of light specifically for lidar applications. This could provide the micron-scale depth resolution of OCT, whilst also being immune to phase noise and able to operate in high loss environments.

"Although lidar can be used to image the overall shape of a person, it typically doesn't capture finer details such as facial features," said team leader Ashley Lyons from the University of Glasgow. "By adding extra depth resolution, our approach could capture enough detail to not only see facial features but even someone's fingerprints."

Approaches to interferometry using photon entanglement have tended to struggle when employed in situations with high levels of light loss, which the project noted is almost always the case with lidar.

"With quantum entangled photons, only so many photon pairs per unit time can be generated before the set-up becomes very technically demanding," said Lyons. "These problems don't exist with classical light, and it is possible to get around the high losses by turning up the laser power."

The Glasgow device aimed to measure two-photon interference by exploiting the ability of two photons meeting at a beam splitter in an interferometer to become entangled, and then sending one of the pair out into the 3D scene and keeping the other in a controlled delay line.

The time taken for the departed photon to return can potentially be measured more precisely by detecting photon pair correlation states than by normal interference, translating into greater depth resolution. The project calculated that its platform's theoretical depth resolution could be as small as 7 microns.

In trials the new device was used to image the two reflective surfaces of a single piece of glass about 2 millimeters thick, which traditional lidar would be unable to distinguish, and created a 3D map of a 20-pence coin. At present the penalty for increased depth resolution is longer imaging time, with an image of the 20-pence coin taking over 10 hours to be generated, although the project envisages a multiple-pulse correlation method to achieve the same result in around 30 seconds.

Commercialization of traditional lidar platforms is currently proceeding at pace, with a number of developers burning through cash in the process. Although this has been driven primarily by automotive applications and lidar's use in autonomous vehicles, developer Velodyne has commented that "lidar is going to transform virtually every industry as we know it."

The Glasgow team expects its new lidar principle to be useful in 3D biometric recognition platforms, as well as in the detection of miniature objects.

"This work could lead to much higher resolution 3D imaging than is possible now, which could be useful for facial recognition and tracking applications that involve small features," said Lyons. "For practical use, conventional lidar could be used to get a rough idea of where an object might be and then the object could be carefully measured with our method."